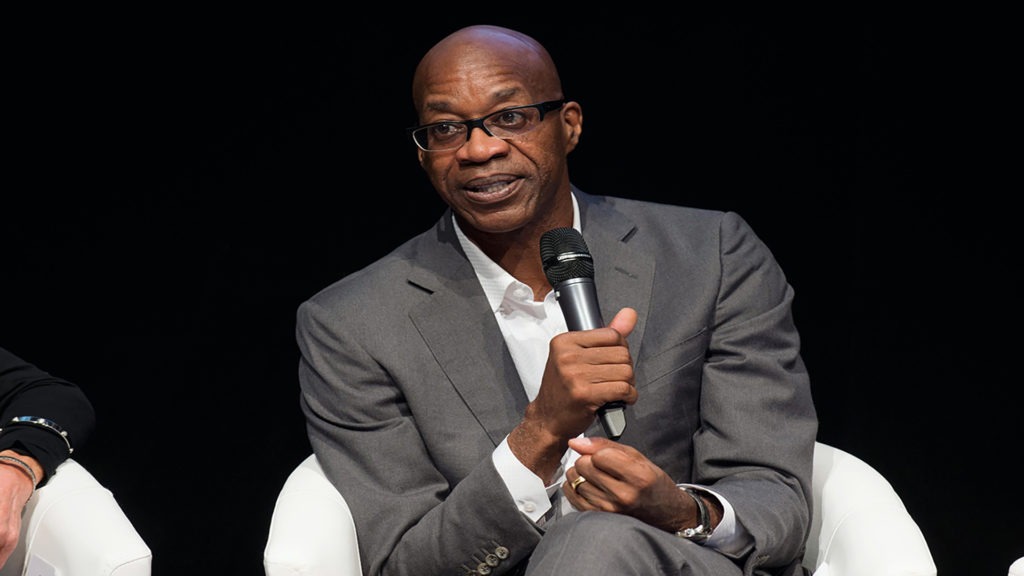 Edwin Moses looks out for the athletes

When Edwin Moses organized the virtual town hall Olympic Memories – Remembered and Repurposed this past April featuring the 1980 U.S. Olympic Team, he did so with Benn Fields in mind. Moses, arguably the world’s greatest hurdler ever, and Fields, a high jumper, are long-time friends. They were in each other’s wedding.

Moses considers himself fortunate to have had the opportunity to compete in the Olympics. He won gold medals at the Montreal 1976 Olympic Games and at Los Angeles 1984 and won bronze at Seoul 1988. Had he won gold medal at the 1980 Games – in the midst of a 10-year stretch when he won 122 consecutive races, he would have been a heavy favorite – Moses would have the record all to himself for most Olympic gold medals in the 400-meter hurdles.

But the U.S. decided to boycott the Moscow Games in response to the Soviet Union’s invasion into Afghanistan. Not only was Moses unable to defend his gold medal, but Fields and more than 200 other 1980 U.S. Olympians never had the chance to compete at the Games. Fields noted that his only gold medal is from the Liberty Bell Classic, a meet held in the U.S. in response to the boycott.

“I don’t think that the [1980] Olympic team ever got the recognition that it deserved and was never thanked for making a sacrifice that no one has really been asked to make,” Moses said.

Diver Megan Neyer has become accustomed to talking about the Olympics in every conversation about her life.

The town hall on April 28 included appearances from five-time Olympic volleyball player Kerri Walsh Jennings and three-time Olympic diver Greg Louganis, who, like Moses, medaled before and after the Moscow Games and is a member of the U.S. Olympic & Paralympic Hall of Fame.

In a pre-recorded message, Walsh Jennings likened the 1980 Olympians to “warriors.” Many of the other speakers during the town hall offered advice to today’s athletes dealing with the postponement of the Tokyo 2020 Olympic Games.

“Edwin’s been looking out for the athletes for a long time,” Fields said.

A few weeks before the 1980 Games, Moses broke his own world record in the 400-meter hurdles at a meet in Milan. That 47.13-second run was nearly 1.6 seconds faster than Volker Beck’s gold-medal time in Moscow.

Moses ran in 20 meets that summer, traveling to cities such as Zurich, Switzerland, and Oslo, Norway. Olympic-bound runners wore their country’s gear during those meets. Moses and most of his teammates kept to their usual training uniform.

“We weren’t exactly proud to be walking around in U.S. team uniforms,” Moses said.

When the Moscow Games took place, Moses stayed at his apartment in Mission Viejo, California, where he roomed with Kenyan runners Henry Rono and Billy Konchellah. (Kenya was among the 66 nations that boycotted the Moscow Games.) Moses did not watch the Moscow Games because they were not televised live in the United States.

Wrestler Lee Kemp was devastated to never compete in the Olympics.

Following his track career, Moses earned a master’s degree in business administration from Pepperdine University and an honorary doctorate degree from the University Massachusetts Boston, in part for his work as an anti-doping advocate. He noticed a need for reform all the way back at the Montreal Games and was a longtime advocate of the need for oversight.

Now the chairman of the World Anti-Doping Agency’s Education Committee, Moses takes every travel opportunity he can get. Stuck at his home in Atlanta because of the coronavirus, Moses keeps busy by tending to his tomato garden and organizing old newspapers. He happily took a break to lead the virtual town hall and recognize the 1980 Olympians and the 2020 athletes still waiting for their Olympic and Paralympic shot.

“Athletes share one thing — they know how to sacrifice to do well,” Fields said. Moses “feels bad for them. … He knows what people go through to get to that point.”

Henry Queen is a student in the Grady Sports Media program at the University of Georgia, which partnered with the U.S. Olympic & Paralympic Museum to produce content during the 2020 spring semester.