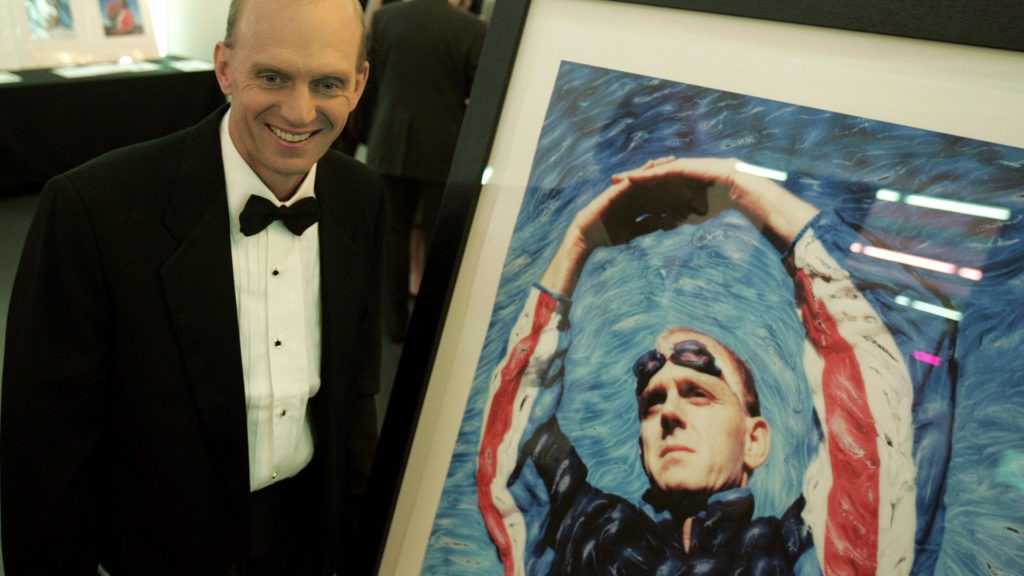 Rowdy Gaines was sitting in a hotel room in Austin, Texas. A junior at Auburn University, he had just finished swimming in the indoor nationals.

Cronkite reported that President Jimmy Carter announced that the U.S. would boycott the Moscow 1980 Olympic Games in response to the Soviet Union’s invasions of Afghanistan.

Two weeks later, the U.S. Olympic Committee announced it would adhere to Carter’s boycott and would not send a team to Moscow.

“I remember every single detail,” Gaines said 40 years later, “and I don’t remember what I ate for breakfast yesterday.”

Diver Megan Neyer has become accustomed to talking about the Olympics in every conversation about her life.

Gaines would compete in the Olympics four years later. He won three gold medals at the Los Angeles 1984 Olympic Games and was inducted into the U.S. Olympic & Paralympic Hall of Fame. He later became NBC’s lead swimming analyst and has been to seven more Olympic Games as a commentator.

Now, Gaines is again facing the disappointment of a disruption to the Olympic schedule.

On March 24, 2020, the International Olympic Committee announced that the Tokyo 2020 Olympic Games and Paralympic Games would be postponed a year due to the coronavirus pandemic.

Gaines remembers the process of grieving he felt in 1980, which helps him empathize with the emotions he imagines Olympic and Paralympic athletes are feeling now.

The first feeling was denial. Then anger. Then sadness.

“There’s incredible sadness,” Gaines said. “Like a depression, that comes over you.”

The only thing missing from Isiah Thomas’s resume is an Olympic appearance.

Slowly, he began to accept what was happening and learned to use it as motivation moving forward.

Gaines completed his senior year at Auburn and retired from swimming in 1981, thinking he had missed his only shot at being an Olympian.

“That’s what everybody did,” Gaines said. “You retired after your senior year in college because there was no money.”

For six months, he lived an average postgraduate life. He went home and worked. Then, he set his sights on the Los Angeles 1984 Olympic Games.

For three years, he refocused himself on the new goal and trained for the Games.

After achieving his dreams of being an Olympian in 1984 – winning gold in the 100-meter freestyle and two relays – Gaines again retired. Though he was soon back at the pool, beginning to work on NBC’s Olympic broadcasts at Barcelona 1992.

Gaines did briefly get back in the water – swimming fast enough to qualify for the U.S. Olympic Trials leading up to the Atlanta 1996 Olympic Games.

Instead, he kept his spot in the broadcast booth.  He struggled with the transition at first, thinking that he could be back in the pool competing with the athletes he was now reporting on.

But that feeling dissipated over time and he grew to love being on air because of his love for the sport.

“I really love swimming. It’s something that I just adore, and it’s a part of my DNA,” Gaines said. “I [love] the athletes and talking about them.”

The Tokyo 2020 Olympic Games would have been Gaines’ eighth Games on-air. Now, in what he considers to be the “golden era” of Olympic swimming, he has to wait one more year.

It is less than the four-year wait he faced as a heartbroken 21-year-old in that Ramada Inn.

“An athlete’s life can come and go in the span of four years,” Gaines said.

Forty years after the 1980 boycott, Gaines’ life in swimming has spanned decades, crossing from the pool to the broadcast booth.

Tori Heck is a student in the Grady Sports Media program at the University of Georgia, which partnered with the U.S. Olympic & Paralympic Museum to produce content during the 2020 spring semester.