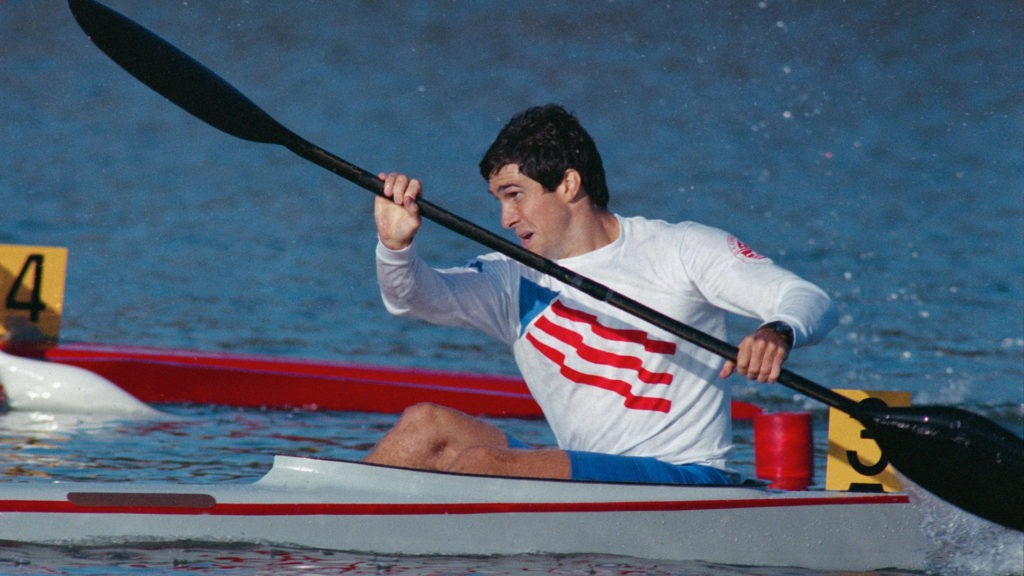 A four-time Olympian, he won two gold medals and one bronze

Greg Barton started designing paddles and kayaks to fit his own personal preference during his own racing career. Now, it is a full-fledged business.

The four-time Olympic kayaker and two-time gold medalist co-owns and operates Epic Kayaks. But in 1980, he was an Olympic hopeful disappointed that the United States had decided to boycott the Moscow 1980 Olympic Games.

“In the grand scheme of things, I really didn’t think [the boycott] would make that much of a difference,” Barton said. “My philosophy is that the Games are about sports and not politics. I didn’t agree with the decision to boycott.”

Growing up on a 2,300-acre farm in central Michigan, Barton and his family’s only neighbors were the 7,000 pigs they owned.

He first began kayaking after his parents started the activity as a hobby. During a race in Michigan, the Bartons met Marcia Jones-Smoke, a three-time Olympian who won the bronze medal at the Tokyo 1964 Olympic Games in the 500-meter race.

“She introduced our family to Olympic-style kayaking,” he said. “I became interested at that time and tried it out for the first time at age 10.”

Following that interaction, the family quickly picked up the sport. Barton traveled to watch his older brother, Bruce, compete at the Montreal 1976 Olympic Games. By 1980, Greg Barton himself had qualified for two International Canoe Federation Sprint World Championships and set his sights on making the U.S. Olympic Team. An engineering major, Barton took a semester off from the University of Michigan to train for the Games. Both Greg and Bruce Barton made the 1980 U.S. Olympic Team.

Then, everything came to a screeching halt. In response to the Soviet Union’s invasion of Afghanistan in 1979, the United States decided to boycott the Moscow Games.

“I was pretty disappointed about it,” he said. “It was something I had been aiming [toward] for a couple years.”

Barton traveled to Europe that summer with a group of 1980 U.S. Olympians to compete in a few races. After returning home, he resumed classes at Michigan.

Barton graduated with a degree in mechanical engineering in 1983, then was faced with a unique career choice. He wanted to continue training to potentially compete in the Los Angeles 1984 Olympic Games, but the U.S. Olympic Committee had sparse monetary resources for kayakers.

To solve this, Barton combined his two passions. He moved back in with his parents, where he began designing and selling boats and paddles. The work allowed him to focus all his energy on his two main loves. Barton continued competing and won the bronze medal at 1,000 meters at Los Angeles 1984, then won two gold medals at the Seoul 1988 Olympic Games.

“I actually thought I had lost” the 1,000-meter race in Seoul, he said. “I’ve usually got a good sense of where my competitor is and I thought he got me. Then the time flashed up and it was mine.”

Barton competed at the Barcelona 1992 Olympic Games, winning bronze. He was the most decorated canoe/kayak athlete in U.S. history before focusing full-time on design. After moving to Washington, he founded his current business with 12-time world surfski champion Oscar Chalupsky. His main focus now is getting people outside and enjoying recreation.

“Basically it is just all about having fun out on the water,” he said. “Getting people in a boat that is comfortable for them where they can have the most enjoyment.”

Mason Cantrell is a student in the Grady Sports Media program at the University of Georgia, which partnered with the U.S. Olympic & Paralympic Museum to produce content during the 2020 spring semester.