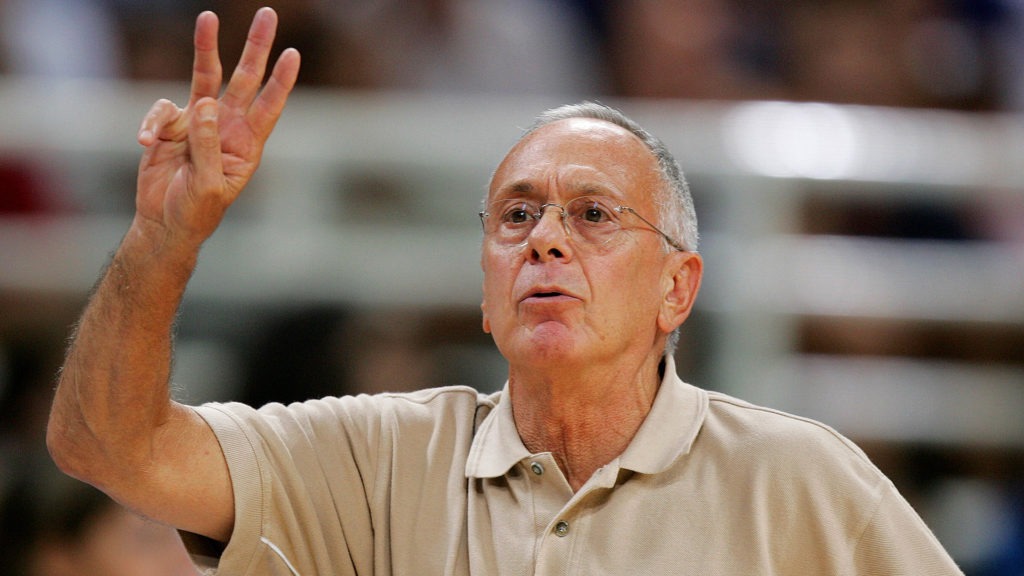 Before he was a Hall of Fame coach, Larry Brown won Olympic gold as a player

The only coach to guide teams to NBA and NCAA championships, the point guard helped Team USA win gold at the Tokyo 1964 Olympic Games

Larry Brown coached the University of Kansas Jayhawks to the NCAA men’s basketball championship in 1988. A decade and a half later, Brown guided the Detroit Pistons to the 2004 NBA championship, becoming the only coach to ever to lead team to both an NCAA and NBA championship.

Brown is well known for his more than 40 years of college and professional coaching experience, having earned induction to the Naismith Memorial Basketball Hall of Fame for his work on the sidelines.

Lesser known – especially among younger generations – is how Brown forged a successful playing career that included being the starting point guard on the U.S. Olympic team that won the gold medal at the Tokyo 1964 Olympic Games. That team is enshrined in the U.S. Olympic& Paralympic Hall of Fame.

Born and raised in New York City, Brown dreamed of playing in the NBA. But only 5 feet 10 – on a good day – Brown worried that his height would prevent him from advancing to the upper echelons of the sport as a player. Perhaps he would teach American history and coach high school basketball.

Brown played at Long Beach High School, leading the team in scoring his senior year and earning a spot to play under Coach Frank McGuire at the University of North Carolina. Following Brown’s freshman year – when McGuire left to coach the Philadelphia Warriors and Wilt Chamberlain – Dean Smith took over.

“I played for the greatest coaches ever,” Brown said. “I had a great high school coach (Bob Gersten) and then went to North Carolina to play for Frank McGuire and Dean Smith. It doesn’t get much better than that.”

While Brown was certain that his playing career would come to a close upon graduation from North Carolina, he was selected by the Washington Bullets in the seventh round of the 1963 NBA Draft. Although he never suited up for the Bullets, he spent the 1963-64 season with the ABA’s Akron Goodyear Wingfoots. He then was shocked to make the 1964 U.S. Olympic Team.

“I was fortunate enough to be one of the 12 players that was selected to play,” Brown said. “There were so many great players that I was kind of surprised when I read my name that I had made the team. I had no idea I would be able to play on that level.

“I was fortunate enough to be one of the 12 players that was selected to play,” Brown said. “There were so many great players that I was kind of surprised when I read my name that I had made the team. I had no idea I would be able to play on that level.

Two of Brown’s Wingfoots teammates, Richard Davies and Pete McCaffrey, joined him on the team, which was composed of collegiate and ABA players. Brown was one of the oldest players on the team — and the shortest.

Having learned many nuances of the game from McGuire and Smith, the Tokyo Games gave Brown another chance to learn from a coaching legend: Hank Iba, who is also a member of the U.S. Olympic & Paralympic Hall of Fame. The team’s assistant coach was Henry Vaughn, who had been a part of the Wingfoots’ coaching staff.

One month before the Tokyo Games, Team USA traveled to train in Hawaii on the U.S. Marine Corps base at Pearl Harbor. While Team USA was relatively inexperienced, there was pressure to perform well; the U.S. was the Olympic five-time defending champion with a 37-game winning streak at the Games. No other team had ever won Olympic gold, including the Soviet Union, which had taken the silver in the previous three Olympics.

“The United States had basically never lost, so everybody assumed that you would show up and win,” Brown said. “When we went over to Tokyo, the Soviets basically had the same team that lost to the Americans with Jerry West and Oscar Robertson in 1960. Everybody expected us to get beat because they were much more experienced.”

Listen: Larry Brown compares today’s Team USA selections to what he experienced trying out for the 1964 Olympic team

In Tokyo, Brown sprained his ankle in Team USA’s first game, a 78-45 win over Australia. The U.S. continued to roll as Brown recovered to full speed, winning six more games in pool play, then beating Puerto Rico, 62-42, in the semifinals and advancing to another championship game against the Soviet Union.

In the championship game, Team USA trailed early, but rallied to lead by eight points at halftime and went on for a 73-59 victory and its sixth consecutive gold medal.

Brown averaged 4.1 points per game throughout Team USA’s nine victories and shot more than 45 percent from the field. With the team’s nine victories in 1964, it extended the winning streak to 46 games in the Olympics.

Brown played professionally for a few more seasons, but said that winning the 1964 gold medal is one of the most meaningful moments in his career.

In the mid 1980s, returning to Tokyo for the first time since 1964, Brown took his wife and children to the Yoyogi National Gymnasium, where Team USA and Brown beat the Soviets in 1964.

“I told my family what a big, beautiful place it was with all of these [grand] stories,” Brown said. “When we walked in, the arena sat 4,000, and they laughed at me.”

The Games will return to Tokyo in 2021, delayed a year due to the COVID-19 pandemic. Having been the Team USA assistant coach at the Sydney 2000 Olympic Games that won gold and head coach at the Athens 2004 Olympic Games that won bronze, Brown said he has a special appreciation for the amount of preparation and work athletes put in only to have the Games delayed a year because of the COVID-19 global health crisis. He said he prays that these Olympians and Paralympians have the chance to compete in 2021.

The Yoyogi National Gymnasium will host Olympic competition again next year – and Brown is looking forward to watching the games.

“The athletes now know they’re going next year, hopefully,” Brown said. “They might have alternative plans, but [those plans are] not like the Olympics. Nothing is like the Olympics, and nothing will compare to that in my mind.”