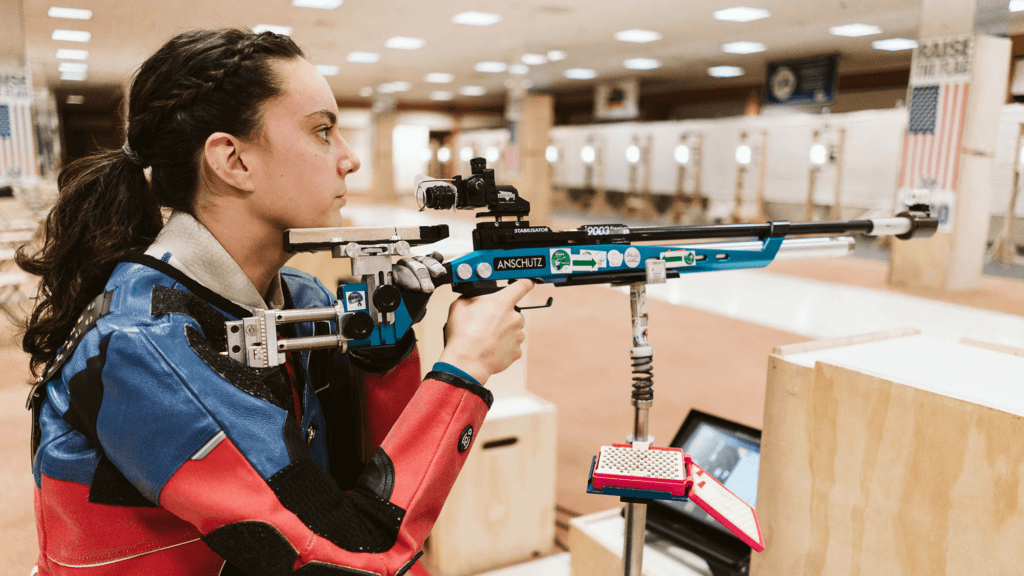 The U.S. Olympic & Paralympic Museum is thrilled to congratulate McKenna Geer, a history-making Paralympic rifle shooter, an MBA graduate and a member of the USOPM guest experience team, on qualifying for the Tokyo 2020 Paralympic Games!

Geer was born with arthrogryposis, a muscle development disability. She began shooting at the age of 12 while participating in a summer sports camp. Although she was originally drawn to wheelchair basketball, she found the individual nature of shooting preferable. Geer showed early promise in shooting, and she began traveling both nationally and internationally for various competitions before graduating high school.

After high school, Geer joined the U.S. Olympic & Paralympic Training Center as a resident athlete where a combination of influential coaching and self-determination transformed her into one of the leading wheelchair rifle shooters in the nation. She qualified and competed at the Rio 2016 Paralympic Games in the R5 mixed 10m air rifle prone SH2 event for which she won bronze, making her the first American woman to medal in a Paralympic shooting event.

Upon returning, Geer continued to train in Colorado Springs while studying for an MBA at DeVry University, which she completed in 2020. She joined the opening team of the U.S. Olympic & Paralympic Museum, helping the Museum celebrate its 2020 opening by both welcoming guests as well as advising the Museum’s designers on more innovative and progressive universal accessibility features.

Geer qualified for the Tokyo 2020 Paralympic Games as part of the seven-member shooting team, now aiming her sights on another history-making medal win for Team USA.

Be sure to keep up with more of the latest news and announcements from USOPM!