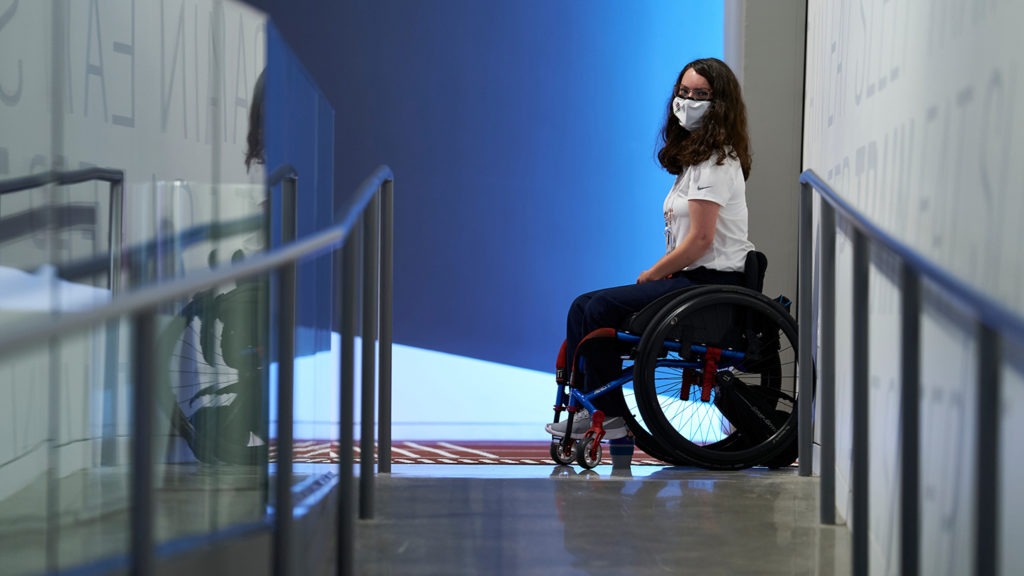 Four Member Guest Experience Team members who are also athletes training for the Tokyo and Beijing Games shared their stories at the Museum’s Member Monday program.

Due to high demand, the program was divided into two sessions to accommodate more members. Paralympic skier Tyler Carter and Paralympic rifle shooter McKenna Geer (pictured above) spoke in the morning, while Paralympic pistol shooter Mike Tagliapetra and Olympic taekwondo hopeful Cheyenne Lewis met with members in the afternoon.

The athletes conveyed their journeys and how they started in their respective sports. The three Paralympians spoke candidly about their competition classifications (the process by which Paralympic athletes are evaluated and categorized to compete against others with similar physical disability) and the nature of their disabilities. Lewis talked of her heartbreak attending Rio 2016 as an alternate and what preparations she is undertaking now for her chance to make the Olympic team for Tokyo.

All of the athletes were impacted by the closure of the U.S. Olympic & Paralympic Training Center last March and talked about the changes to their training because of COVID-19. The qualification process for Tokyo is underway for the three summer athletes and they are waiting for announcements on some of the events to held in the spring and early summer.

The athletes also talked about their roles as Guest Experience staff at the Museum. All were excited to have been part of the opening staff and to be part of the Museum’s mission of sharing the stories of Team USA.

Tyler “TC” Carter – two-time Paralympian in Alpine Skiing (27th at Sochi 2014, 19th at PyeongChang 2018); training for Beijing 2022. Lost right leg below the knee at the age of one. Started skiing at age 8. Awarded a scholarship to attend and spectate the Vancouver 2010 Paralympic Winter Games, which led to his personal dream and goal of representing One of major passions in life is giving back to communities’ through nonprofit work, specifically promoting healthy and active lifestyles. Fun Facts: Ice cream connoisseur (chocolate) and huge fan of Captain America.

McKenna Geer – 2016 Paralympic bronze medalist in air rifle shooting; training for Tokyo Games. Born with arthrogryposis, a disability that affected her muscle development and caused the contracture of joints through her body. Started shooting at the age 12 during a camp for kids with disabilities. By 15, she was traveling internationally for competitions. Upon graduating high school in 2014, she moved to the U.S. Olympic and Paralympic Training Center to become a full-time resident athlete. Honored to represent at the 2016 Paralympics in Rio. Hopes to make an impact on the next generation of kids with disabilities by helping them discover their own dreams.

Cheyenne Lewis – Olympic hopeful was second at 2016 U.S. Olympic trials and was an alternate at Rio 2016. Born and raised in the San Francisco Bay area and started taekwondo at age 6.  Competed at national level since 2006. Numerous gold medals in national and international competition, including 2015 Pan American Games. Favorite taekwondo competition is the U.S. Open, which she has won five times in four different weight classes. After graduating from the University of California, Berkeley, she was invited to Colorado Springs to train at USA Taekwondo’s new National Center of Excellence.

Mike Tagliapietra – 2016 Paralympian. From 2009 to 2012, he competed in more than 30 road races (marathons, triathlons, etc.) using a handcycle or racing chair. Realizing he was not going to be a Paralympian in these events, Tagliapietra discovered Paralympic shooting through the Phoenix Rod and Gun Club. He was immediately taken in by USA Shooting athletes and famous alums including John Zurek, Brenda Silva and Ruby Fox. After six months of frustration trying to learn to shoot Air Pistol, he took a trip to Colorado to get away. During that trip, he called Paralympic National Team Coach Bob Foth who talked him into committing full-time to the sport and becoming a resident athlete at the U.S. Olympic & Paralympic Training Center in Colorado Springs. He was named USA Shooting’s Paralympic Athlete of the Year in 2014 and 2015.