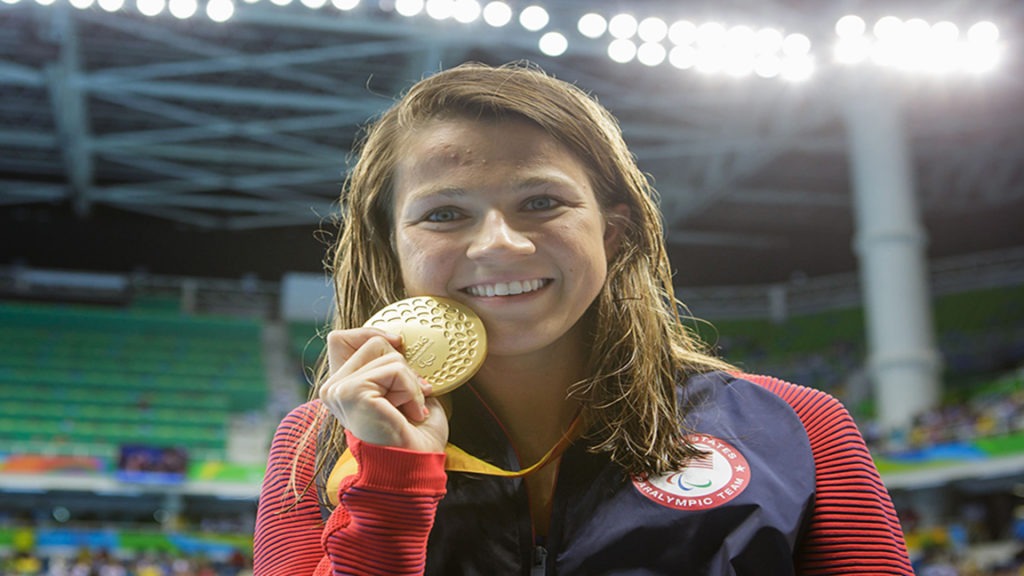 Swimmer Becca Meyers found her happy place in the pool

Deaf and losing her vision, Meyers is a two-time Paralympian and six-time medalist, with three gold medals

As a youngster, Becca Meyers tagged along to her older siblings’ various sporting events. They were good athletes. Tim would go on to play soccer and run track in high school, while Lisa would play field hockey and tennis. Becca wanted to be just like them. Basketball, lacrosse, soccer, tennis – she tried them all while growing up in suburban Baltimore.

Born with Usher syndrome, Meyers has been profoundly deaf since birth and is gradually losing her vision. While she yearned to play sports, she struggled with balance and hand-eye coordination.

“Trying to chase the ball on the soccer field or follow the tennis ball on a tennis court or catch a lacrosse ball was very challenging,” Meyers said. “When I was five years old, my mom put me in the water for swim lessons just as an activity, something different.”

And it was different. The water was smooth, not uneven like a rec-league grass field. And Meyers did not have to worry about catching or throwing anything. It was all up to her.

“You need to put her on the swim team,” the instructor told Meyers’ mother.

Listen: In the pool, Becca Meyers was just another swimmer

Meyers joined the swim team the following summer and then joined a year-round swim club.

Indeed, those swim lessons were the kick-start of a tremendous swimming career that already includes two Paralympic Games and six medals, three of them gold.

“I never got out of the water after that,” Meyers said. “I loved being in the water. I could take my [cochlear] implants out after a long day at school and just relax, feel free. It was my happy place. I didn’t have to worry about chasing a ball or watching the ball come towards me. I didn’t have to worry about running down bumpy soccer fields without tripping over something or falling down, things like that. Just me and the water. And that’s how I fell in love with swimming.”

“I loved going to the pool after school all day. Being at school, I had to listen twice as hard as everyone else and make sure I was understanding what the teacher was saying. I also had to make sure I knew where I was going visually, make sure I didn’t trip over things there or anything like that. So when I got to the pool, I was always mentally tired from a long day at school but I knew as soon as I got to the pool, I could hop in and forget about everything and just swim. It was my therapy place. I could just go and forget that I was disabled. Forget that I have vision and hearing problems and just be free in the water.”

While the implants allow her to hear, Meyers takes them out when she swims. During practice, it usually does not present a problem communicating with coaches. But at meets the start of a race can sometimes be an issue as Meyers does not hear the starting gun. There are different signals used to alert deaf athletes to the start of a race, but Meyers said they were not always reliable, especially at youth meets.

“I learned how to deal with it as I got older,” Meyers said. “But when I was younger, I remember one race, I was going for a time to qualify for one of the state meets and I had a late start and I missed the qualifying time by one-tenth of a second because of that start.”

It would not be long before Meyers was competing well beyond state meets. The next few years were a whirlwind as Meyers continually stepped up in competition, eventually joining the short list of deaf athletes to compete for Team USA at the Olympic or Paralympic Games even while her vision deteriorated.

“It’s like looking through two straws – that’s how much vision I have,” Meyers said. “So eventually I will go blind, but I have a lot of faith in technology that they’re going to find something. They’re going to come up with an eye transplant or eye implant or something because they already did that with hearing.”

Competing in the S13 class for visually impaired athletes (deafness is not one of the disability categories recognized by the Paralympics), Meyers won the silver medal in the 200-meter individual medley and the bronze medal in the 100 freestyle at the London 2012 Paralympic Games. Four years later, Meyers set three world records and won three gold medals (100 butterfly, 200 individual medley and 400 freestyle) and one silver (100 freestyle) at the Rio de Janeiro 2016 Paralympic Games.

A student at Franklin & Marshall College in Lancaster, Pennsylvania, Meyers and her guide dog, Birdie, took off the past year to focus on training for the Tokyo Paralympic 2020 Games. With the Games postponed to 2021, Meyers is unsure of her exact future plans but looks forward to competing in Tokyo and completing her final year of college and walking across the stage at graduation. “I did miss being in the classroom this past year,” Meyers said. “I like having a balance between swimming and school, so I’m trying to work through that