Listening to Billy Mills’ voice, it is apparent that the 81-year-old is just as motivated now as he was coming out of the last turn in the 10,000-meter race at the Tokyo 1964 Olympic Games.

“The elders have visions and the youth have dreams,” said Mills, who remains active with the nonprofit organization he co-founded, Running Strong for American Indian Youth. “The program wants to empower the elders and inspire the dreams of the youth through sport.”

Billy Mills grew up poor on the vast and remote Pine Ridge Indian Reservation in southwestern South Dakota. He knows how far he and other American Indians have come, but feels there is a long way to go.

“Growing up in Pine Ridge was very unique, in the sense we didn’t have a car, didn’t know that we were in poverty because the gardens always were able to provide food,” Mills said. “But in many ways, we were locked outside the American dream. We’d go off the reservation and we’d run into some very, very strong racism.

“My education was very good in many areas, but was limited and almost non-existent in regards to learning about the free enterprise system. I had very little knowledge about what the American Dream meant, because we were locked outside of it.

“The young childlife I had was very innocent. To go play, I would bike one way 15 miles to go to a dam, Oglala Dam, with a couple of my buddies. We would hide our bikes in the brush. We’d have with us rope, an inner tube, a pump and a loaf of bread and peanut butter, carrots from the gardens. We would swim about half a mile across the lake and play in the plum trees for hours. There was a spigot where we could get fresh water. Then we would paddle back a half mile and 15-mile ride back into town. Just by playing, I was developing cardiovascular conditioning.”

And that is where Billy Mills unknowingly began training for a running career that was highlighted by one of the greatest upsets in Olympic Games history, when at Tokyo 1964 Mills charged from behind to become the only man from the Western Hemisphere to win a gold medal in the 10,000-meter run.

Mills grew up in Pine Ridge, in one of the poorest regions of the U.S. He was eight years old when his mother died; four years later, his father died. Now an orphan, Mills attended Haskell Institute, a boarding school for Native Americans in Lawrence, Kansas. Mills was such a strong runner at Haskell that he earned a scholarship to run for the University of Kansas.

“To this day, I have an incredible support system in the Lawrence community, in the University of Kansas community, in the Haskell community,” Mills said, though he recalled various instances of discrimination, such as being limited to only a few blocks while attending Haskell, not being able to join a fraternity or share a room with close friends who were black or white at Kansas.

Another time, the Kansas track team traveled to a meet in Texas where the white athletes were supposed to stay at a hotel with a swimming pool and the black athletes had beds lined up at a nearby military barracks; the entire team decided to stay together at the military barracks.  Mills made All-American one year at the AAU Championships; when they took a team photo, someone asked Mills to leave the picture – only to have another athlete say to stand next to him in the photo.

After graduating from Kansas, Mills was commissioned into U.S. Marine Corps officer candidate program. He had long been enamored by the marines’ dress blues. Mills also knew the Tokyo Games were coming up in 1 ½ years and that each branch of the military would be vying to see which branch could put the most athletes on the U.S. Olympic Team.

However, during boot camp and for several months thereafter, Mills did not run. In December 1962, he was commissioned as a marine corps officer and the next month started running again, averaging 35 miles a week. The next year, at Camp Pendleton to train for the Olympic Games, Mills met Earl “Tommy” Thomson, who had recently retired as the U.S. Naval Academy track coach and was at Camp Pendleton to train marines. Thomson was deaf and read lips, but he and Mills immediately forged a bond as Thomson served as a mentor.

“He was the first white man I ever trusted,” Mills said.

Mills qualified for the Olympic Games in the 10,000-meter run and the marathon. In Tokyo, Mills did not scale back on his preparation; while it was suggested that he rest during the final days before the race and limit his training to perhaps a 200-meter race out of a starting block to mimic a closing sprint, Mills went for a 25-mile run just four days before the 10,000.

On race day, Mills had the strength and the finishing kick, coming from behind to dramatically claim gold. As Billy and his wife Pat celebrated, they knew right then that they needed to use this victory to help give back. (One week later, Mills finished 14th in the marathon.) 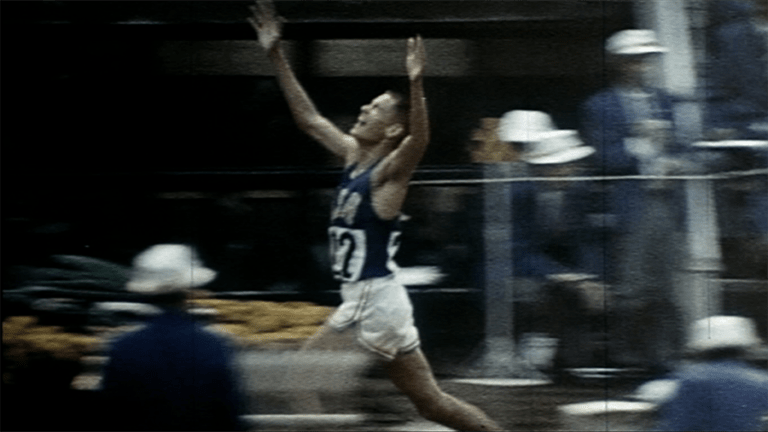 The movie Running Brave chronicled Mills’ improbable victory. Mills then joined Nicholas Sparks to co-author a book, Wokini: A Lakota Journey to Happiness and Self-Understanding. Mills is a spokesperson for Christian Relief Services and he co-founded the foundation Running Strong for American Indian Youth. As part of Running Strong’s commitment to its community, it operates the Dreamstarter program, providing ten $10,000 grants for five consecutive years to help the next generation of American Indian youths make its dreams come true.

“For this country to mature into a full-fledged democracy, more than ever in the United States of America we need the people of color, we need our women, people of different religions, we need everyone to come together and understand so collectively we can choreograph the horizon of the future,” Mills said. “We have to teach this to our young people. And sport has an obligation to teach its young people, because they become ambassadors.”

Things to do in June at the U.S. Olympic & Paralympic Museum

From celebrating dads to enjoying the gourmet food at Flame Café with views of Pikes Peak, there are plenty of fun things to do at Colorado Springs’ top new attraction!
More in spotlight