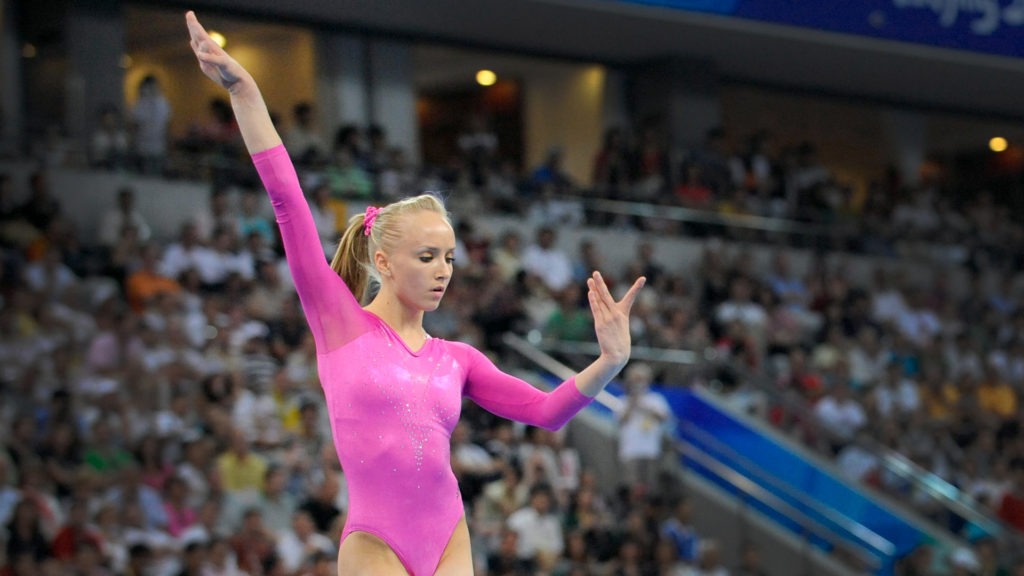 The daughter of a four-time Olympic medalist and a world champion, gymnast Nastia Liukin cemented her own legacy with all-around Olympic gold.

Her father won two gold medals and two silver medals in gymnastics at the Seoul 1988 Olympic Games. Her mother won a world championship in rhythmic gymnastics.

So while Nastia Liukin might have felt pressure to follow her parents to the top of the medal podium, it certainly was not surprising when she captured her first world titles in 2005. Liukin went on to win nine world championship medals and five Olympic gold medals, including the coveted all-around gold – to more than cement her place in her own family.

This year, however, she has done something no other Liukin family member can claim – earning induction into the U.S. Olympic & Paralympic Hall of Fame.

“I was totally shocked,” Liukin told USA Gymnastics. “I knew I was a finalist, but there were so many other incredible finalists — so many that I looked up to as a little girl. So just to be even a finalist amongst those Olympians was a huge honor.”

The Hall of Fame will be housed in the U.S. Olympic & Paralympic Museum, set to open in early 2020 in Colorado Springs.

The Hall of Fame honor will serve as a belated birthday present for Liukin, who turned 30 on Oct. 30 – just two days before the Class of 2019 induction ceremony on Nov. 1 at the U.S. Olympic & Paralympic Training Center in Colorado Springs.

Liukin, who was born in Moscow and immigrated to the United States when she was a 2 1/2-year-old toddler, was raised in the Dallas suburb of Parker, Texas. Her parents, Valeri and Anna, became gymnastics coaches and Nastia trained in their elite gym, World Olympic Gymnastics Academy. Also training in this gym was Carly Patterson, who went on to claim the all-around title in the Athens 2004 Olympic Games.

Born in 1989, Liukin was too young to compete in the Athens Games, but it was widely believed she would have been considered for the U.S. Olympic Team that year had she been age-eligible.

Four years later, at age 17, Liukin finally was old enough to compete in the Beijing 2008 Olympic Games — and she made the most of the opportunity.

Entering those Games, the gold-medal favorite was U.S. teammate Shawn Johnson – who not only claimed the all-around title at the 2007 World Championships, but also won the all-around crowns at both the 2008 national championships and U.S. Olympic Trials.

In Beijing, however, Liukin won the gold medal, edging Johnson by six-tenths of a point. It marked the third time a U.S. women’s gymnast had won the Olympic all-around gold medal (Retton and Patterson are the other two) and the first time U.S. women placed 1-2 in the event.

Including the all-around gold medal, Liukin returned from Beijing with five Olympic medals – three silvers and one bronze.

The result was especially emotional and fitting since Liukin achieved these feats at the same time her father marked the 20th anniversary of his Olympic accomplishments. Valeri told reporters in Beijing that is was “not possible to describe how proud I am.”

Valeri won two gold medals in 1988 but just missed claiming the men’s all-around title. For him to coach his only child to that milestone took some of the sting away from his own personal disappointment.

“Just to know that he was so close to (the all-around gold) and didn’t quite achieve it,” Nastia Liukin told reporters at the time, “and I hope, you know, I cleared away any of those bad little memories for him. I hope that this definitely tops it. I have a few more to go, but it is an amazing accomplishment just to be here with him, out on the floor 20 years after he competed. I think it just means so much more to both of us. I don’t know, just all the hard work paying off. All the injuries, tears, blood, rips — everything.”

At the Olympic Games and Paralympic Games, U.S. medalists have the opportunity to reward their coaches with a medal of their own: the Order of the Ikkos. Liukin made sure to present her father with his honor.

“He was always the one who said, ‘You can do this,’ “ Liukin said. “I remember this very vividly, especially after I had my (ankle) injury the year before the Olympics. He sat me down and calculated the scores and was very strategic. He showed me it really was possible to win the all-around gold medal.”

Liukin attempted to make a second Olympic bid, for the London 2012 Olympic Games, but came up short at the U.S. Olympic Trials.

It was a difficult time for Liukin but one that taught her an enduring lesson. As she wrote in a first-person account, “Winning a gold medal, I learned, doesn’t define you. It’s the moments that lead up to or follow that moment of glory, the messy, gritty, challenging moments that speak to who you are.”

While Liukin is no longer dazzling crowds with her elegance or balletic grace in the gym, she remains active in the sport of gymnastics. She made a point of supporting up-and-coming gymnasts by creating the Nastia Liukin Cup gymnastics competition, and she travels the world to major gymnastics competitions as an NBC broadcaster. She worked for NBC at the Rio de Janeiro 2016 Olympic Games and will be a part of the NBC broadcasting team at the Tokyo 2020 Olympic Games.

She was providing TV commentary from the 2019 World Championships in Germany where Simone Biles dominated to win the world title. The event was held in Stuttgart, where Liukin had won three of her nine world championship medals. As talented as Liukin was in her prime, she has watched Biles and noted that “she’s the best we’ve ever seen.”

Away from the mat, Liukin has remained busy as well. She earned her college degree from New York University in 2016 and has been involved with several business projects. She founded an app called Grander, which she has said is designed to inspire women in and out of sports. She is also an avid fashion blogger.

And now she joins an esteemed group of Olympians who are part of the U.S. Olympic & Paralympic Hall of Fame.

“Going back to the 8-year-old Nastia, I was the girl who wanted to do flips because it was fun,” Liukin said after being named to the Hall of Fame. “I never thought I’d be sitting here today with this news.”

Amy Rosewater has covered five Olympic Games and previously worked as an editor and writer for TeamUSA.org. Her work has appeared in The New York Times, The Washington Post, ESPN.com and other media outlets.

The U.S. Olympic & Paralympic Museum offers a timeless experience by capturing the history of Team USA at the Olympic and Paralympic Games, as well as the hopes and dreams of future generations.
ABOUT US
<span clas