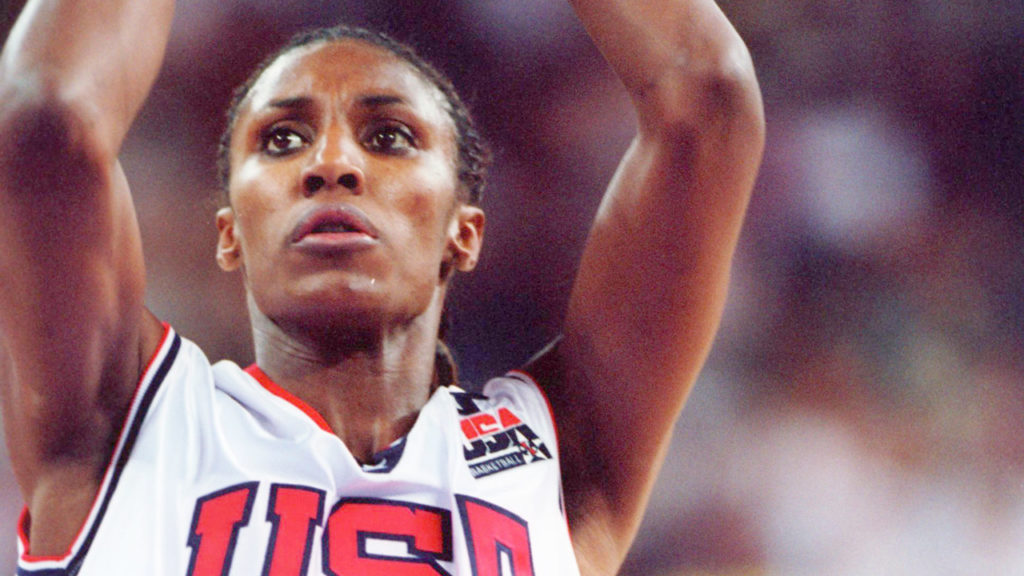 Lisa Leslie was one of the most dominant basketball players of all time, leading the U.S. to four Olympic gold medals.

She wore those because she had won them all while helping the team win in four different Olympic Games: Atlanta 1996, Sydney 2000, Athens 2004 and then Beijing.

“I put this uniform on when I was in the 11th grade and I worked my way up to the national team, then the world championship, then the Olympics,” Leslie said at that press conference in Beijing.

“My dream was to hang four gold medals around my neck by the time I finished the Olympics here.”

What might have seem a far-fetched dream to some, had become a reality for the 6-foot-5 center from Southern California.

Leslie began competing with the U.S. Junior National Team when she was 17 years old and went on to win many games with Team USA, including world championships in 1998 and 2002. Her four Olympic gold medals is the most for a women’s basketball player, with four others winning that many as well: Teresa Edwards (who also won a bronze in addition to her four golds), Sue Bird, Diana Taurasi and Tamika Catchings. The U.S. women have won the gold medal at the past six Olympics.

As Bird said of Leslie then: “She’s a major reason why basketball in the U.S. — not just Olympics-wise, not just WNBA-wise — is what it is today.”

Because of her great success, Leslie was selected to the U.S. Olympic & Paralympic Hall of Fame Class of 2019. She is the second women’s basketball player receiving that honor; Edwards was the first.

“Lisa is so deserving of the USOPC Hall,” former University of Connecticut and WNBA great and current television analyst Rebecca Lobo said. “There are a few ‘originals’ that come to mind when you think of Olympians who have won multiple gold medals in basketball – Teresa Edwards, Dawn Staley and Lisa are among them.

“She did as much as anyone of that generation to set the standard for what Olympic success and longevity can mean in women’s hoops.”

Leslie grew up in Compton, California, the town that has produced several other sport icons, including tennis greats Serena and Venus Williams, basketball Hall-of-Famer Dennis Johnson, baseball Hall-of-Famer Eddie Murray and current NFL star Richard Sherman. (Actor Kevin Costner also grew up there.) Although she was not initially interested in basketball, Leslie started playing the game in junior high.

“I felt like I belonged in the gym maybe more than anywhere else,” she wrote in her autobiography, Don’t Let the Lipstick Fool You. “Even though I was a girl, I could play.”

Leslie could, even playing with and against boys. She became so good that in one high school game, she scored 101 points in one game – and that was just in the first half (the opposing team gave up at halftime so there was no second half).

As she continued to grow – Leslie was already 6 feet when in the sixth grade — she was recruited by many colleges and eventually chose the University of Southern California. Leslie shined there, earning All-Pac 10 Conference honors all four of her seasons; she was a three-time All-American and won the Naismith College Player of the Year award in 1994.

After playing a season in Italy, Leslie played for the Los Angeles Sparks when the WNBA began in 1997. She led the Sparks to two WNBA championships, won three MVP awards and made eight All-Star teams. She also was inducted into the Naismith Memorial Basketball Hall of Fame.

And she was the first player in WNBA history to dunk!

“My reaction was pure amazement,” she wrote in her book. “Coach (Michael) Cooper was jumping up and down when he saw the dunk. Coop had seen his share of great dunks during his days with the Lakers, but he was really excited to see me slam one down and make history.”

Leslie also played overseas briefly with the Moscow Spartak team, for whom Bird and Taurasi did as well. Her last WNBA season was 2009, when she still averaged 15.4 points per game. She finished her WNBA career with 6,263 points and 3,307 rebounds – both league-highs. She also made the time to earn a master’s degree in business administration.

“I don’t think there’s an athlete on the court today or in this league or in youth leagues all around this country who don’t owe a debt of gratitude to Lisa Leslie, or don’t look up to her as an iconic figure in women’s basketball,” then-WNBA president Donna Orender told the New York Times in 2009. “She has been one of the great competitors, the most fierce competitor.”

In 2005, Leslie married Michael Lockwood, who played basketball at the U.S. Air Force Academy and is a pilot for UPS. They have two children, Lauren and Michael II. Leslie had her daughter Lauren in 2007, the year she did not play for the Sparks because she was pregnant.

In addition to basketball, Leslie has worked as a fashion model for Armani, Tommy Hilfiger, Anne Klein and others; appeared in several TV shows including an episode of The Simpsons; and worked as a basketball analyst and broadcaster, including for the NBA’s Orlando Magic.

And now Leslie also coaches the Triplets team in the men’s BIG3 3-on-3 basketball league. She led the Triplets to a league championship in 2019 and was named Coach of the Year. It was just another example of her talent, motivation and ability to help others.

“It is also important to me to mentor some of America’s youngest players,” Leslie wrote in her autobiography. “I hope that I can put less emphasis on individual skills and more on the team concepts that have made USA Basketball so formidable for so many years in international competition.”

As Leslie told students at California State University, Sacramento this September: “Decide what you’re passionate about and go after it. Have the courage to try, and if you try and fail, try again.”

Jim Caple is a freelance sportswriter who has worked many years for ESPN and the St. Paul Pioneer Press. He has covered 12 Olympics and sports on six continents.