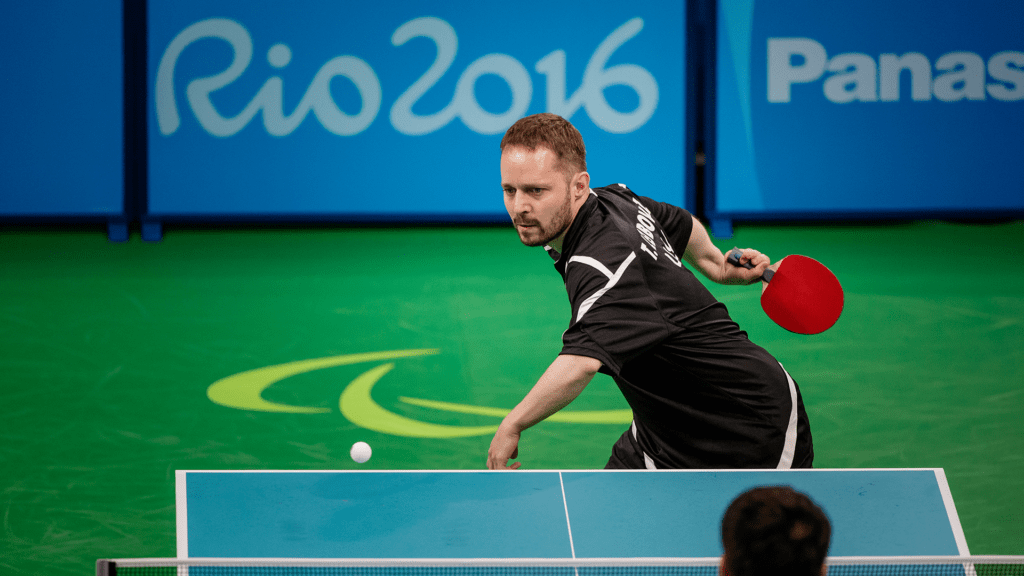 Tahl Leibovitz faced a difficult childhood stained by abusive parents who eventually evicted him despite still being a young teenager. Facing homelessness, Leibovitz slept on the streets or on the train and relied on a soup kitchen and occasional shoplifting to survive. He had nowhere to go. Then he found table tennis at the South Queens Boys and Girls Club.

Leibovitz played from open to close. If he couldn’t find a partner, Leo Compton, the executive director of the South Queens Boys and Girls Club, would push a table against the wall so he could continue playing. “He played table tennis for hours,” said Compton. “Tahl would have been lost if he didn’t have table tennis.”

From homelessness to benign bone tumors, nothing could keep Leibovitz down. His determination, matched with his quickly developing skills, earned him a spot on the Atlanta 1996 Paralympic Team at age 21. Once again, he prevailed, taking home the gold medal in class 7 singles and the bronze medal in the teams event.

These early accomplishments marked the beginning of a very successful career. Leibovitz has since appeared in five Paralympic Games, taking home another bronze medal at Athens 2004 for class 7 singles. A Table Tennis Hall of Fame inductee, he participated in his sixth Games in Tokyo.

Table tennis led to more than just athletic success. He passed his General Education Development exam despite missing almost all of junior high school and high school and earned a bachelor’s degree in sociology and philosophy from Queens College. Leibovitz then obtained a master’s degree in urban affairs from NYU.

He has used his success and education to support others in the same way table tennis supported him. “It opened a door for me, and now I use the game to open the door for others.” He founded Project Table Tennis, a nonprofit organization that uses the sport to teach participants, ranging from assisted living tenants to children, a variety of skills including “coordination, social enrichment and competitive strategies.”

Leibovitz remains an inspiring role model for all, whether they are an aspiring athlete or not, and proves that with hard work, determination and passion, anything is possible.

Tahl Leibovitz’s signed table tennis paddle is currently on display at the U.S. Olympic & Paralympic Museum. He used this paddle at his Atlanta 1996 Paralympic debut where he won his first gold. Upon close inspection, one can even see smears and marks on the black paddle where Leibovitz slammed his medal-winning shots. It can be found in the Summer Games exhibit.