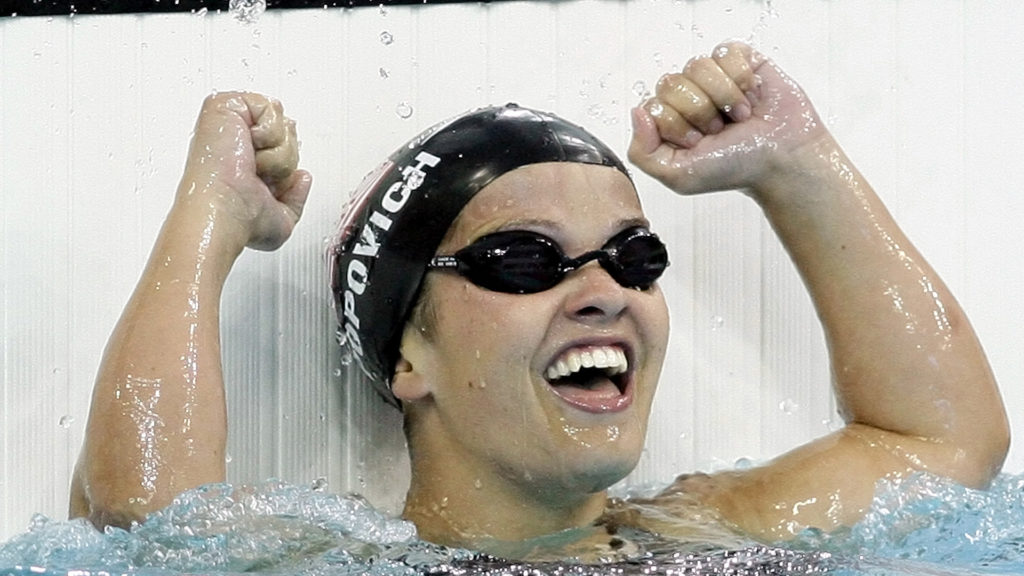 Erin Popovich: Swimming to her place on the wall

Erin Popovich took up swimming at age 12 and less than one year later was competing in national championships. She won 19 medals over three Paralympic Games.

One day about 10 years ago, Erin Popovich was walking down the hall to the pool at the U.S. Olympic & Paralympic Training Center in Colorado Springs, where she was training for her fourth and final International Paralympic Committee Swimming World Championships.

As usual, Popovich passed the gallery of photographs on the hallway wall of champion swimmers who had trained in that pool. Michael Phelps. Janet Evans. Matt Biondi. Natalie Coughlin.  And many more — all swimmers she had looked up to during her career. Pictures she had seen very often but that still continued to arrest her eye, even if only in passing.

“It truly was a wall of legends,” she said.

And then, on this day, Popovich stopped in her tracks. There was a new photo of a swimmer on the wall: Erin Popovich.

“No one had told me it was going up there,” she said.  “I hope I have done it justice and that it can stay up there a while longer.”

As it turns out, the pictures have come down during a renovation.

But Erin Popovich’s place among U.S. swimming legends is assured forever with her selection to the Class of 2019 of the U.S. Olympic & Paralympic Hall of Fame.

She is the sixth Paralympian and just the second Paralympic swimmer inducted to the Hall of Fame. The other, John Morgan, was inducted in 2008.

Popovich took up swimming when her congenital short-limbed dwarfism (achondroplasia) started to minimize her chances to succeed in the other sports she had played through elementary school, especially soccer. Swimming then became transformative in a life that has led her to Paralympic sport administration since her competitive retirement in 2010.  Her current post is Associate Director of Sports Operations for U.S. Paralympic Swimming.

“When puberty started hitting, kids I played against in other sports like soccer started to get growth spurts of maybe six inches,” Popovich recalled of her childhood in Butte, Montana.  “My big growth spurt was maybe an inch in a year.

“I was always a competitive person, and I needed another competitive outlet.  I had never really swam, but I had school friends on the swim team in town, and it intrigued me.”

She began swimming, if you could call it that, at age 12.  Popovich, whose growth stopped at 4 feet 5 inches, laughs at memories of dog paddling through her first practices and getting disqualified several times by violations of touch and turn rules she had yet to learn.

“Fortunately, I have always been blessed with great coaches who had patience with me,” she said.

Popovich caught on so fast that seven months later, she competed at the U.S. Disability Championships. At that meet, she made the U.S. team for the Paralympic worlds in Christchurch, New Zealand – and went on to won five world medals, four of them gold.

“That world meet lit a fire in me,” she said. “It made me think I could do very well with this.  At that point, I wasn’t sure what it all entailed and what the future held, but I knew I wanted to give it a go.”

Following her Paralympic debut at Sydney 2000, Popovich needed major surgery to straighten her legs because curvature was causing her joints to deteriorate. That had the ancillary effect of adding enough height (“maybe a centimeter,” she joked) to move her into a higher Paralympic competitive classification (S7 from S6). She would be even more successful in the new classification.

In 2003, with the following year’s Athens Paralympic Games her immediate goal, Popovich entered Colorado State University and began working with its women’s swimming coaches, John Mattos and Woody Woodard.  She would be a walk-on with their Division I team and compete in a couple invitational meets early in the 2003-04 season, belying her feeling that “I never in a million years thought I would be able to compete in any form of college swim meets.”

But, even as a walk-on, she faced an eligibility dilemma upon coming back the next season: Her Athens gold haul created sponsor interest.

Popovich told the coaches she would turn down the sponsors if it meant she no longer could train with them and the team. They told her she could stay with the program even if she signed sponsorship deals that would make her ineligible to compete for the Rams in meets.

“I know they were one of the biggest factors in how well I did in Athens,” she said.  “I am very grateful for their willingness to let me continue to practice at the same time as the team.”

Woodard, an assistant coach when Popovich came to CSU and now the women’s head coach, felt he learned as much from her as she did from him.

“I became more patient in the way I coached,” Woodard said. “I had to learn more about Paralympic swimmers and how to adapt my coaching style in some technical respects. Erin and I had a few arguments on deck, where she `instructed’ me as to her ability and some of her physical restrictions. I believe my time with Erin allowed for me to coach individuals on a team on a more personal basis.”

Woodard worked with her nearly one-on-one for the four months before Athens. He noticed she trained every session with her goals top of mind.  One goal, the coach recalled her telling him, was to get seven gold medals in a single Games before Phelps. And Popovich did just that.

When she retired, Popovich had an overflowing trophy case, with all the medals and two ESPYs for Best Female Athlete with a Disability.  She also had a 2007 CSU degree in health and exercise science and experience in Paralympic sport that made longtime U.S. Paralympic administrator Julie Dussliere want to bring Popovich to USOPC headquarters in Colorado Springs.

“Her first job with us was a form of athlete customer service, and Erin was a perfect fit for that because her personality and outlook on things are super positive,” said Dussliere, now U.S. Chief of Paralympic Sport.

And Colorado Springs has been a perfect fit for Popovich, who loves to hike, fish, snowboard, camp and ride her quarter horse, Too Lazy To Be Crazy.  Wherever the rest of life takes her, Popovich will always be there, among the luminaries in the Hall of Fame exhibit at the soon-to-open U.S. Olympic & Paralympic Museum.

The U.S. Olympic & Paralympic Museum offers a timeless experience by capturing the history of Team USA at the Olympic and Paralympic Games, as well as the hopes and dreams of future generations.
ABOUT US
Menu
<div class="elementor-column-wrap elementor-eleme