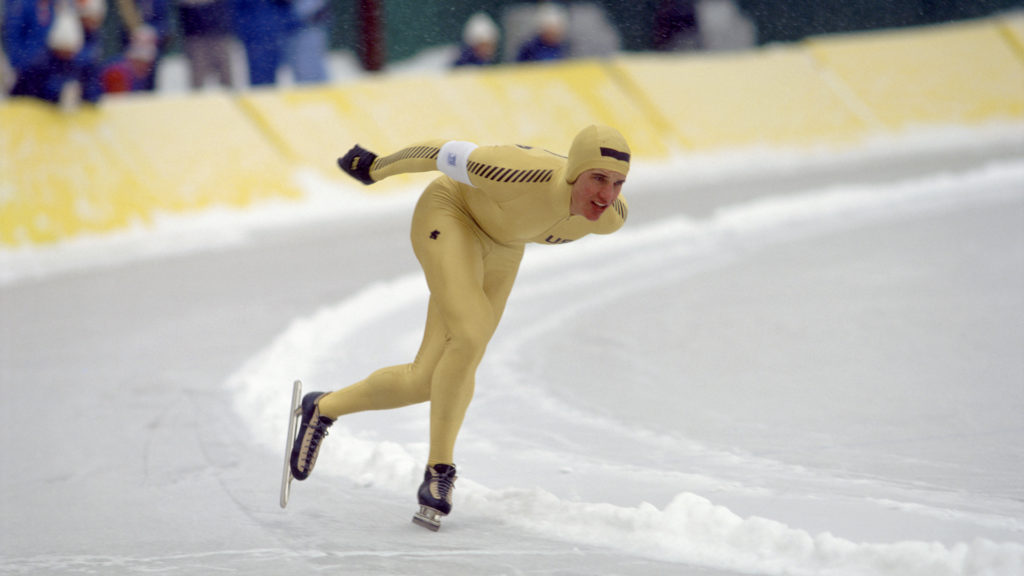 Eric Heiden: five Olympic gold medals were only the start of his success

The speedskater’s accomplishments at Lake Placid 1980 have never been matched, but he is content to be known for his professional career as an orthpedist

Eric Heiden is an accomplished professional, having served as an NBA team physician and for the U.S. Olympic speed skating and cycling teams. He is now an orthopedic surgeon specializing in shoulder and knee issues in Park City, Utah, where he and his wife Karen run their own orthopedic practice.

“Most of my patients have no clue that I had a career as an athlete and I kind of like that,” Heiden said in a 2010 interview. “Because that means they come to me for what I am known for today, which is to be a doctor and hopefully one of the best doctors that they can come visit.

“Being a sportsman is a wonderful life, but it’s entertainment, and what I do now, which is to help other human beings, is very rewarding.”

Heiden’s athletic career, though, is worth revisiting.

A native of Madison, Wisconsin, Heiden was an elite speedskater. He participated in the Innsbruck 1976 Olympic Winter Games – where his best finish was seventh in the 1,500-meter race — and followed that up by winning two World Junior Speedskating Championships and three World Allround Championships.

Then came the Lake Placid 1980 Olympic Winter Games, where Heiden’s sister, Beth also participate in her second Winter Games and won bronze in the 3,000-meter race. Eric Heiden arrived in Upstate New York as a heavy favorite in the speed skating events. He was selected to represent all of the participating athletes and take the Olympic Oath at the Opening Ceremony.

But who could have known the greatness that Heiden would produce?

In a span of nine days, Heiden won an unprecedented five gold medals, sweeping the entire men’s speed skating slate and setting Olympic records in every event, from the 500-meter sprint to the grueling 10,000-meter race in which he set a new world record by more than six seconds despite waking up late and hurrying to make the race in time.

“What did he will never be done again,” Derek Parra, who won one gold medal and one silver at Salt Lake City 2002 and later coached the U.S. Speed Skating Team, said in a 2010 interview.

“People often ask me what race is the most satisfying, especially from the Olympics, and I would tell you it is the 10,000 meters and it has to do with the fact it is longest race in skating,” Heiden said. “Those that do very well at it are technically very good skaters and they have had to put in a lot of time in the sport. They’ve had to invest in their training and in speedskating. So I’ve always cherished those who can skate the 10,000 meters best. One of the greatest races I’ve had in my career was the 10,000 meters in Lake Placid.”

Heiden’s accomplishments are not just special for speed skating; they are unmatched by any other Winter Olympian. The five gold medals make Heiden the most decorate Winter Olympian ever.

After lapping the field around the speedskating oval, Heiden had a brief stint as a hockey player. He then moved over to the sport of cycling, where he won a United States Cycling Championship and competed in the Tour de France. He was inducted into the United States Bicycling Hall of Fame.

“You would never know what Eric’s accomplished unless someone tells you because he would never bring it up,” four-time Olympic speedskater KC Boutiette said in a 2017 profile on Heiden. “Then when most people find out, he’s a little uncomfortable and just says, ‘Yup, yeah, uh-huh, that was me, it was pretty cool.’ But that’s the kind of guy Heiden is.”

His athletic career complete, Heiden went back to college, earning his undergraduate degree from Stanford University in 1984 and then graduating from medical school in 1991, embarking on the next phase of his career.

“I was relieved my [skating] career was behind me and it was time to move on to other things,” Heiden said. “It was an exciting time in Lake Placid. It was a stressful time. And it was a time that I will never forget and something I really cherish.”