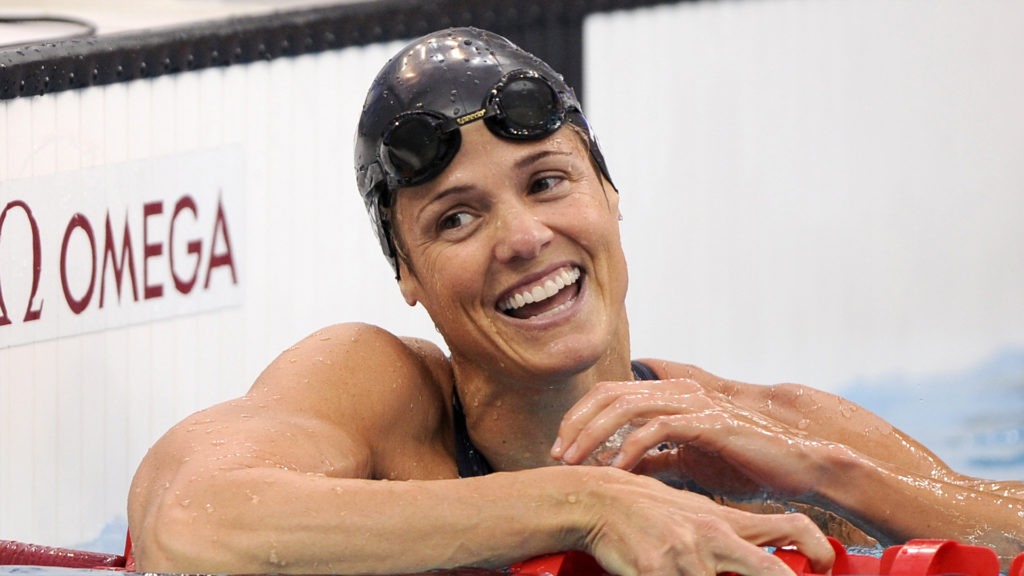 Dara Torres: No shortage of motivation

Dara Torres made her Olympic debut as a teenager; 24 years later she made history as the oldest swimmer to win an Olympic medal.

Dara Torres was a swimming phenom at 14. She was even more formidable at 41.

After morning sickness during her pregnancy pushed Torres back into the pool, peer pressure sent her into serious training. And everyone who asked, “Aren’t you too old?” gave Torres all the motivation she needed to make her fifth U.S. Olympic Swim Team.

After all, didn’t people say the same thing before Torres made her fourth Olympic team at age 33?

“Whenever there’s a challenge,” she said, “either people can take it and have that light a fire under you or you can let it bum you out and ruin you.”

Obviously, Torres was fueled by a blaze the size of an Olympic Cauldron.

In an unprecedented run from 1984 to 2008, the California native won 12 Olympic medals – four gold, four silver and four bronze. Torres will be inducted into the U.S. Olympic & Paralympic Hall of Fame on Nov. 1 as a member of the Class of 2019.

“I don’t think it’s about winning all those medals,” said Torres, who is still fit at 52 and living in South Florida. “For me it’s having longevity in what you love to do and not putting an age limit on your dreams.”

No, age was never a concern for Dara Torres. She almost made a record sixth Olympic team in 2012, missing by a mere .09 in the 50-meter freestyle at age 45.

“I gave it one more time and it just didn’t work out,” said Torres. “I was satisfied because I learned from The Olympics that if you give it everything you’ve got there’s nothing else you could do.

“I had to console my mom, who was crying, and my daughter who was upset at six years old because she wasn’t going to get to see Ryan Lochte and Michael Phelps.”

Lochte is still competitive at 35 while Phelps retired at 31. No one blinks an eye at 30-something swimmers nowadays, but when Torres did it she was an anomaly.

And to think Torres started out as a typical teen with talent. After winning her first national title at 14, she set her first world record in the 50 free at 15 (25.69 seconds). Torres was 17 when she made her Olympic debut in her hometown at the Los Angeles 1984 Olympic Games.

“I felt I was a little out of my league,” Torres said. “I was this kid that had a lot of energy and kind of bouncing off the walls and had never been in that environment where there were so many incredible athletes walking by like Carl Lewis, Mary Lou Retton, Michael Jordan. I was sort of in awe and looking back I should have been like, ‘Wait a minute, I’m an Olympian, too.’ ”

Torres struck gold on the 4×100-meter freestyle relay. Four years later, Torres went into the Seoul 1988 Olympic Games with the world’s fastest time in the 100-meter freestyle. “Then I swam horrible at The Olympics and I got seventh,” she said.

Four years later at the Barcelona 1992 Olympic Games, Torres qualified in only in the 4×100-meter freestyle relay. In retrospect, Torres suspected she had overtrained, but at the time she thought, “Well, I guess I’m getting older. I don’t have those fast-twitch muscle fibers any more.”

Torres and her relay-mates left Barcelona with another gold medal.

“It was a great experience for me,” said Torres, who was a U.S. team captain. “Back then, you didn’t see a lot of post-collegiate swimmers in The Olympics, and at that point I’m like, ‘All right, I’ve done three (Olympics), no individual medals, but I have two golds, a silver and bronze, and I’m done. Let’s just move on with life.’ ”

For seven years, Torres worked as a broadcaster, a model who became the first elite swimmer to appear in the Sports Illustrated Swimsuit issue and hosted informercials for Billy Blanks and Tae Bo workouts.

Less than a year before the Sydney 2000 Olympic Games, Torres moved to California to train with Stanford University Coach Richard Quick.

Yet along came the doubters.

“I’ll never forget after those Games,” Torres said, “Richard said to me, ‘You know, it’s just too bad. I don’t think you reached your potential.’ I was like, ‘What are you talking about? I’m 33. How can I not have reached my potential?’

“I just kind of laughed when he said that.”

Torres began the next chapter of her life, which included pregnancy and terrible morning sickness. She wanted to continue working out, “so (in 2005) I finally decided to go swim, which I hadn’t in five years,” Torres said. “I knew if I got sick, I could just get sick in the gutter and not worry about it.”

The swimming actually helped with her nausea. About a week before Torres delivered daughter Tessa in April 2006, she was approached by a masters team coach. He asked if she would swim in a meet a few weeks later to drum up publicity.

When Torres finally got the nerve to ask her doctor, he gave her the green light. She swam respectably, and thought, “Okay, that’s it.”

But Tessa’s father, who was also a swimmer, encouraged Dara to compete in the masters world championships at Stanford, just two months away.

“I didn’t mean to, but somehow qualified for the (U.S. Olympic) Trials,” Torres said. “Everyone kept coming up to me and saying, ‘It’d be great to see a middle-aged person go to the Olympic Games.’ With the peer pressure of all these older swimmers saying that, I was like, ‘I’ll do it!’ ”

Instead of the nine weekly workouts she did prior to Sydney 2000, while taking care of Tessa, Torres trained five times a week for the Beijing 2008 Olympic Games.

She secured sponsorships, including funding from Michael Bloomberg in return for speeches.

“I said, ‘Hey, I’m thinking about making a comeback and he basically said, ‘Aren’t you too old?’ ” Torres said.

Cue the motivational music. Torres became the first American swimmer to qualify for five Olympic Games and the oldest swimmer to win an Olympic medal. She won three silvers on two relays and the 50-meter freestyle, which she lost to Britta Steffen of Germany by one-hundredth of a second while lowering her own American record to 24.07 seconds.

Torres believed that .01 would haunt her “every single day until I died,” but with maturity came a new perspective.

“It just wasn’t my day to win,” said Torres, whose American record lasted nine years. “I cried and I had my moments, but then I thought, ‘How can I go out and give motivational talks and be mad about something when I gave it everything I had?’ ”

She also won praise for an act of sportsmanship.

When Therese Alshammar’s suit ripped before the semis of the 50 free, Torres tried to repair the damage and delay the race until the Swedish swimmer was ready.

“The motherly instinct and the competitive instinct kicked in,” said Torres, who was ranked fifth in the world while Alshammar was No. 2. “I wouldn’t be able to live with myself knowing that there was someone who needed help and I didn’t help her.”

She also wanted to race against the best.

After Beijing, Torres still wasn’t ready to quit. Despite knee issues, she competed in the 2009 World Championships in Rome, finishing eighth in the 50-meter freestyle. She had to use a ladder to get out of the pool.

Following reconstructive knee surgery and the publication of two books — Age is Just a Number: Achieve Your Dreams at Any Stage in Your Life and Gold Medal Fitness: A Revolutionary 5-Week Program –Torres went to lunch with her coach. Michael Lohberg was dying from a rare blood disorder and wanted to train her for the London 2012 Olympic Games.

He replied, ‘Well, it’s a challenge.”

“The minute he said challenge, I’m like. ‘All right!’” Torres said. “But I also thought it would help him live a little longer.”

Lohberg passed away in April 2011. Even though Torres didn’t qualify for London, she thrilled her contemporaries by defeating swimmers half her age

Now Torres stays busy giving motivational talks, serving as a spokesperson for a CBD oil company, CaniBrands, and appearing on the all-female sports show, “We Need to Talk.” She co-owns and teaches at a fitness studio in Massachusetts and is on the board for the Princess Charlene of Monaco Foundation, which promotes water safety.

Spinning, Solidcore and Bar Method keep Torres in shape and she tries to swim with the kids on her old team in Coral Springs, Florida, at least once a week.

While Torres hasn’t ruled out masters swimming – “We’ll see” — she’s attempting to keep her competitiveness on the back burner.

“It’s not like I go out and seek it,” Torres said. “I think I’ve calmed down some over the years. But if someone challenges you, it’s hard not to get those juices flowing.”

Karen Rosen attended her first Olympics in Montreal in 1976 on a family vacation and was a spotter for ABC at the Los Angeles 1984 Olympic Games. As a sports writer for the Atlanta Journal-Constitution, Around the Rings and the U.S. Olympic Committee, she has covered every Olympics since 1992, including Barcelona, where her father, Mel, was the U.S. Men’s Track and Field Team head coach.