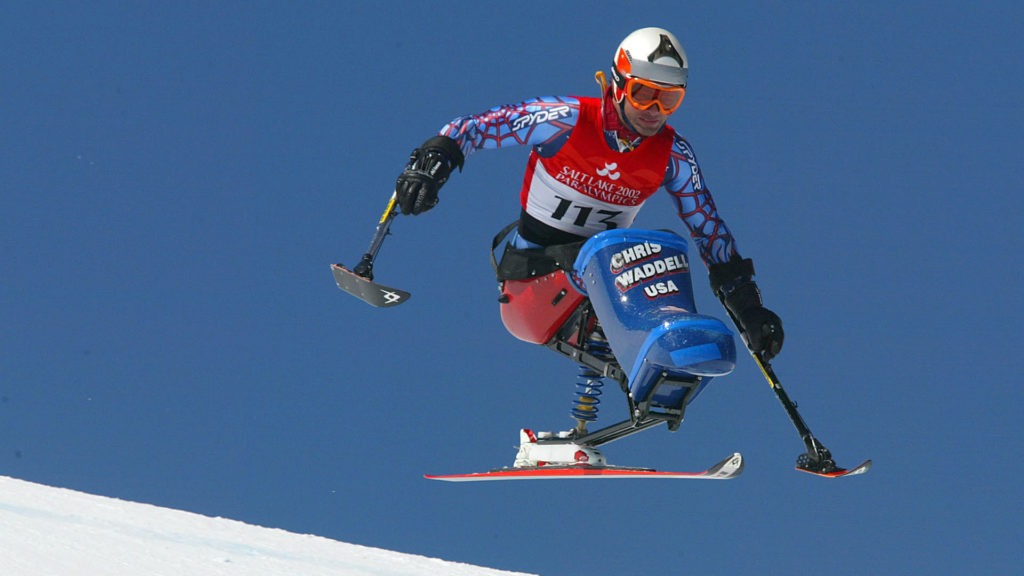 Chris Waddell was an avid follower of The Olympics and a successful skier; after a ski accident left him paralyzed from the waist down, he recovered to compete in seven Paralympics and win 13 medals.

Chris Waddell has very vivid recollections of being clustered around the television with his family, watching the Montreal 1976 Olympic Games, mesmerized by the likes of gymnastics legend Nadia Comaneci.

“It was not exactly the same quality of TV as we have today,” Waddell said with a laugh, “but we all sat and watched the Olympic Games. Those were the first Games I really remember. I saw on the screen seven perfect scores (over two events) – 10’s – and I realized that perfect actually exists. I saw the number 10 come up seven times, and I thought, ‘That’s a lot of perfect.’ ”

Waddell’s fascination with The Olympics continued. But just as the TV screen from the 1970s was a bit fuzzy, there was always a bit of a disconnect from Waddell to the Olympic athletes – The Games were something he and others watched from afar, through light beams on a TV. The world of Nadia and perfect 10’s seemed almost intangible.

Although Waddell, the son of ski instructors, became a talented and competitive skier, eventually joining the ski team at Middlebury College in Vermont, The Olympics remained a distant yardstick.

Oddly enough, it wasn’t until after a crushing ski accident on December 20, 1988, that Waddell’s path toward athletic glory was blazed. The crash left him paralyzed from the waist down but opened the doors to a career in mono-skiing and wheelchair track.

Waddell went on to win 13 medals – five gold – over the course of four Paralympic Winter Games and three Summer Paralympic Games. This past September, Waddell was named to the U.S. Olympic & Paralympic Hall of Fame; he will join the rest of the induction class for a ceremony on Nov. 1 in Colorado Springs.

“An award like this solidifies your history in some ways,” Waddell said in an interview from Park City, Utah, where he lives and works as a motivational speaker, operates a non-profit organization called One Revolution and is working on bringing a new TV show concept to life. “Had I not been in that accident, I probably would have ski raced through college and then been a grown up.”

While he was a student at Middlebury, Waddell majored in international politics and economics and studied French. He envisioned graduating and perhaps embarking on a career in New York City with a law firm or banking.

Like a slalom course with twists and turns, Waddell’s course ended up taking a life of its own.

The ski accident occurred on the first day of Waddell’s Christmas vacation. He had just completed his latest round of finals and term papers and all he wanted to do was hit the slopes.

“I knew that to be a successful member of the (Middlebury) ski team was going to take everything I had,” Waddell said. “My goal was to push myself to the pointwhere I wanted to quit.”

Then came the crash that broke his back. And everything changed – from his physical inabilities to his new physical capabilities and a changed perspective on life.

“If you would have told me before my accident that I would have a paralyzing accident, I probably would have told you that my life would not be worth living,” Waddell said. “It’s now been 31 years since that December and I got to compete for 15 years.

While Waddell was recovering in the hospital, Pan Am flight 103 exploded over Lockerbie, Scotland, after a bomb detonated. All 259 people on board were killed, in addition to 11 others on the ground. News of the attack was on every television in the hospital. Even though Waddell’s mind was in a bit of a morphine haze, he caught the headlines.

“I tried to put things in perspective of the tragedy,” Waddell said. “All those kids on board were going home and they just fell from the sky. Days afterward, I thought, ‘Well, I’m alive.’ It became pretty simple – a moment of clarity after the tragedy.

“I knew I would ski again.”

Just two months later, on February 20, 1999, Waddell returned to Middlebury. His weight had dropped from 175 pounds to 125. He could not stay up past 8 p.m. – hours before his fellow college friends were preparing to go out for the night. It took him an hour to get ready in the morning.

Things might have been different, but Waddell was determined to ski again. The Friends of Middlebury Skiing bought his first mono-ski on the recommendation of Middlebury Coach Bart Bradford, who encouraged Waddell to stay a part of the team. It did not matter that he had never seen anyone ski on a mono-ski before he would strap one on – he was going to do it.

Exactly 362 days after the accident, Waddell was skiing again – sort of.

But it was a start.

From those humble beginnings, Waddell set his sights on competing in the Paralympic Games. He thought he would make the U.S. ski team after his first race.

In 1991, he was named to the U.S. Disabled Ski Team, and Waddell thought he thought he would make the U.S. Paralympic Team in 1992. On the ski lift in Keystone, Colorado, Waddell was told not to expect to make the Paralympic team. Undaunted, Waddell replied that he would retire if that prediction became reality.

“That year was the most challenging year,” he said. “There was no convincing argument for me to not make the team.”

Defying the odds, he not only made the team but went on to capture two silver medals — in slalom and giant slalom — in Albertville.

Two years later, in Lillehammer, Waddell dominated the Paralympic Games, claiming four gold medals, in slalom, giant slalom, Super-G and downhill. He added to his medal collection in Nagano in 1998 with a gold medal and two more silvers and closed his competitive skiing career with three more medals in Salt Lake City in 2002.

Waddell also competed in wheelchair track in the summer edition of the Paralympic Games in 1996, 2000 and 2004.

In the fall of 2009 – a decade after his mono-skiing career began – Waddell decided to push the limits even more by becoming the first “nearly unassisted” paraplegic person to summit Mount Kilimanjaro. His journey up the 19,340-foot mountain in Tanzania using a handcycle, was tracked in a documentary titled “One Revolution.”

In 2017, Waddell powered his way through the Boston Marathon using a wheelchair. As a youngster growing up in Massachusetts, Waddell recalled going to Boston for the marathon to watch four-time champion Bill Rodgers. What left perhaps a more lasting impression, however, was seeing the wheelchair racers cross the finish line. Little did Waddell know back then that he, too, would compete in the race in a wheelchair one day.

Over the years, Waddell has been honored many times over, including being inducted into the U.S. Ski and Snowboard Hall of Fame and the Paralympic Hall of Fame. He has made commencement speeches and was even honored by the Dalai Lama as an Unsung Hero of Compassion.

But being inducted into the U.S. Olympic and Paralympic Hall of Fame is truly a gratifying highlight for him.

And it has once again provided him a platform for spotlighting attention on “a group of people who are often considered invisible.”

Said Waddell, “This was the gift the accident gave me.”

Amy Rosewater has covered five Olympic Games and previously worked as an editor and writer for TeamUSA.org. Her work has appeared in The New York Times, The Washington Post, ESPN.com and other media outlets.