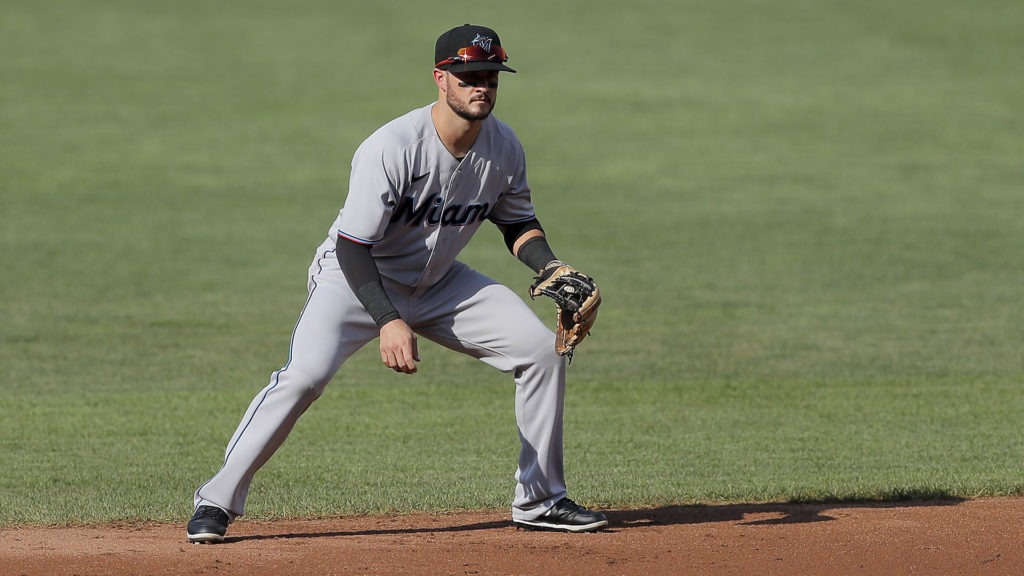 There are few similarities between Eddy Alvarez’s first dream – which culminated with an Olympic silver medal – and his next athletic dream. Becoming one of the world’s best speedskaters and making a Major League Baseball roster don’t have much in common.

“The only similarity I can really come up with is we go left,” Alvarez said in a conference call with reporters, joking about comparing running the bases to short-track speedskating.

It could be said that speedskaters and ballplayers both wear helmets, too.

Alvarez went back to work training and held a tryout attended by a handful of scouts. Just four months after the Sochi Games, he signed as a free agent with the Chicago White Sox. Alvarez then spent six seasons working his way through the minor leagues, traded to the Miami Marlins prior to the 2019 season.

Alvarez spent the 2019 season at the Marlins’ top minor league affiliate, the Class AAA New Orleans Baby Cakes. He batted .323 with 18 doubles and 12 home runs in just 66 games, earning an invitation to the Marlins’ spring training this year.

While spring training was paused because of the COVID-19 global health crisis, when practice resumed and the season began, Alvarez was among the handful of Marlins who continued working out in case they were needed. When 17 Marlins were placed on the injured list following a COVID-19 outbreak, Alvarez picked up his cell phone and received the word from a handful of Marlins executives: He was headed to the majors.

“I kind of lost it,” Alvarez said in an interview with reporters. “It’s something that we as athletes wait for our entire lives, because we know the amount of dedication and hard work it takes us to achieve a goal like this. I knew immediately I had to share the news with my parents.”

After winning the pentathlon and decathlon at Stockholm 1912, Jim Thorpe later played pro baseball and football

It was, after all, Walter and Mabel Alvarez, Cuban-American immigrants, who helped their children realize those dreams growing up in Miami.

Eddy’s older brother, Nick, was an outfielder and played six seasons in the minors, topping out at Class AAA Las Vegas. While Eddy also played baseball growing up, he had an obvious knack for skating. He began as a successful inline skater, but it was apparent he needed to make the transition to the ice – which required 40-minute trips each way just to get on the ice before dawn.

Several other successful speedskaters had started as inline skaters and Alvarez joined that list, rising through the ranks of skating and traveling all over the country to compete, earning the nickname Eddy the Jet.

Alvarez also continued playing baseball and even had a college scholarship offer. The pull of the approaching Vancouver 2010 Games was strong, though, and Alvarez headed to Utah to train. He won a gold medal in the 3,000-meter team relay at the World Junior Short Track Speedskating Championships in 2009.

When he did not make the 2010 U.S. Olympic team, Alvarez went back to baseball, joining the team at Salt Lake Community College for the 2011 season, starting at shortstop and earning all-conference honors.

While he enjoyed baseball and was successful on the diamond, Alvarez’s knees were in tremendous pain, a product of all of the crouching he did to start his skating races. In 2012, he had surgery on both knees and was immobilized for six weeks.

There were no guarantees that the surgery would be successful, that he would skate at an elite level or be able to return to baseball. Although the timetable was short, once his knees healed, Alvarez went back to speedskating. He qualified for Sochi 2014 in three individual events, but those races resulted in a collision, a fall and a disqualification.

Alvarez, though, found redemption in the 5,000 relay, skating the third leg as Team USA won the silver medal.

Then it was back to the baseball diamond. The work ethic that helped Alvarez qualify for Team USA was evident as he regained his skills and steadily progressed to the cusp of the majors. When the Marlins called, Alvarez was ready. He made his major league debut on August 5, starting both games in a doubleheader at Baltimore and becoming the first Olympic medalist in a sport other than baseball to appear in a major league game since Jim Thorpe.

“I had the same jitters walking through Opening Ceremonies as I did stepping up and hearing the announcer say that it’s my big league debut,” Alvarez said. “So it was unbelievable moment, a moment I’m going to cherish.”

Four days later, Alvarez got his first hit, going 3 for 4 with a double and stealing a base in a 4-2 loss to the New York Mets. Alvarez had already planned what do to with the ball from his first big-league hit.

“It’s going right next to my medal,” he said.