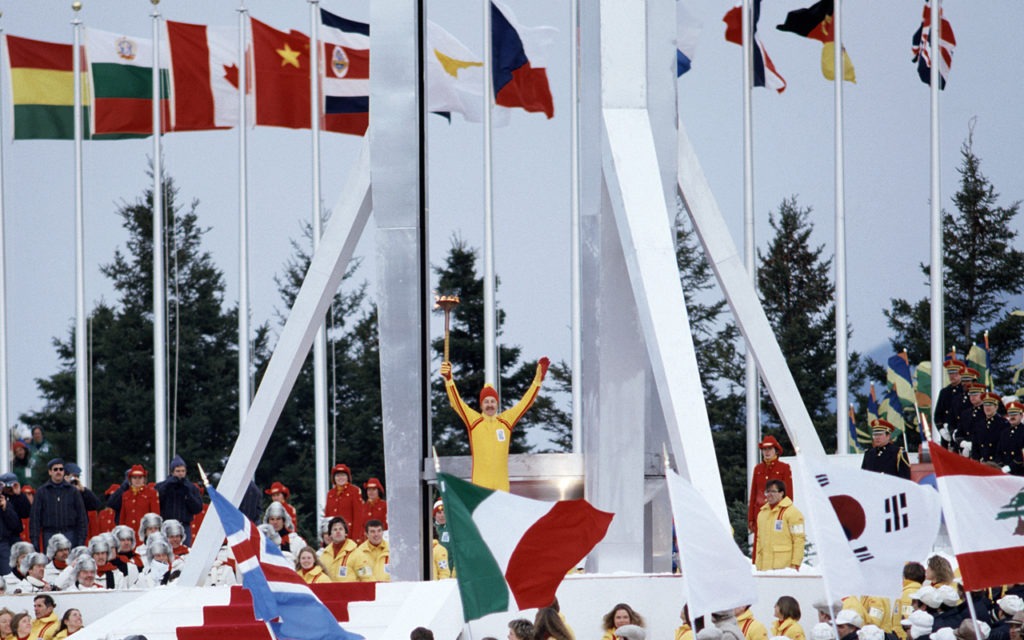 Passing the test: How Charles Kerr was chosen to light the Olympic Cauldron

Having written an essay, aced an interview and passed physical testing, 44-year-old Dr. Charles M. Kerr reported to Yorktown, Virginia, with the 25 other men and 26 women selected from a pool of thousands of applicants to carry the Olympic Torch to Upstate New York, in the lead-up to the Lake Placid 1980 Olympic Winter Games.

A psychiatrist from Tucson, Arizona, Kerr had been a doctor in the U.S. Navy, including a three-year stint on the nuclear submarine USS Ethan Allen. A man who loved his country, he was thrilled to be selected to the group of torch bearers. There would be one from each of the 50 states plus the District of Columbia and the Games’ host city, Lake Placid.

Kerr had picked up distance running in the previous few years, running several marathons, including the prestigious Boston Marathon and New York Marathon. But being a part of the Torch Relay was going to be the experience of a lifetime.

The runners took turns carrying the Olympic Torch for a mile at a time on a journey that traced the American Revolution Bicentennial Trail up the East Coast, through Washington, Baltimore, Philadelphia and New York. Upon reaching Albany, New York, the Torch Relay split in two – one route went through the Champlain Valley and the other through the Adirondack Mountains – before reuniting in Lake Placid on February 8, five days before the Opening Ceremony.

“You know, some people, they started getting tired and holding the torch low, but not me,” Charles Kerr told his son, Tim, the second-oldest of Kerr’s five boys. “I was holding that sucker high!”

It was the quintessential Kerr, described as super-patriotic by his sons. Tim Kerr remembers the family gathering around the television every four years to watch the Olympics.

“He grew up running track and when the Olympics came on, especially track, we all had to watch it,” Tim Kerr said. “Anything with the Olympics, he was all over it.”

In 1980, the Olympic Torch Relay Team had representatives from across the country. Kerr had been chosen after a process that began when he saw a newspaper ad soliciting would-be runners. The application included an essay on the Greek ideal of the “Whole Man” – an athlete, an artist, a scholar and a thinker. More than 8,000 people responded nationwide and 260 finalists were chosen, five for each spot. The finalists were interviewed in Dallas in March 1979 and candidates were selected on their “personal appearance, articulation of Olympic ideals and general attitude.” The chosen 52 then had to run three miles to prove they were physically capable.

If you knew his father, Tim Kerr said, Charles Kerr was a perfect fit for the job.

And it only made sense, Tim Kerr said, when the Olympic Torch arrived in Lake Placid and the Torch Relay Team voted on who should be selected to carry the torch in the Opening Ceremony and light the Olympic Cauldron. In a newspaper photo the next day, upon hearing the news, Kerr could be seen excitedly rising from a folding chair. “Ready to do a fist pump!” Tim Kerr said.

While Charles Kerr prepared for the big assignment, with his then-wife Esther already in Lake Placid, the rest of the family scrambled to join them. Chuck and Tim were attending the University of Arizona, while David, Scott and Erik were still in high school and middle school in Tucson and staying with friends.

“We had to jump on a plane immediately,” Tim Kerr said. “I drove us to the airport. I gunned it. We had to make this flight. … My brothers were like, ‘Holy crap!’ But hey, you want to get on the plane? Strap in. … It was a 1970 Fleetwood Cadillac limousine. It had a 501 [powerful engine] in it. I put it through the test on that run. It had some get up and go for sure.”

The brothers made their flight, had an extended layover in Chicago due to mechanical trouble, and eventually landed in Upstate New York.

Meantime, in Lake Placid, Charles Kerr was going through final preparations, including the fitting of an orange-yellow jumpsuit with red trim that he would wear to circle the track, climb a set of stairs and light the Olympic Cauldron in the Opening Ceremony. Right up until he entered the stadium, Tim Kerr said, officials from the Japanese company that manufactured the jumpsuit were fidgeting with the way it fit his father.

There had been concern about mild temperatures and a lack of snow in Lake Placid, which indeed would force some of the outdoor events to be postponed a few days and make Lake Placid 1980 the first Olympics to use artificial snow.

“But they got snow the night before [the Opening Ceremony], a lot of it, and my dad is really worried that he is going to slip and fall because it’s real icy and not the clearest out there for him to run around the track with the torch,” Tim Kerr said. “And then, he said, something caught him off guard, a thought came into his head.

“My grandmother left my dad’s family when my dad was 14 years old. She just left. Nobody knows where she went. Nobody has ever found her. She got in a taxi and left. So when my dad starting running, it came into my dad’s head: ‘I wonder if my mom can see me?’ ”

With those thoughts sifting through his mind, Kerr navigated his way to light the Olympic Cauldron, pausing and facing the crowd with the torch held high before dramatically igniting the flame. The Kerrs remained in Lake Placid for a few days as spectators — celebrating Charles Kerr’s 45th birthday the day after the Opening Ceremony — then returned to Tucson where Charles Kerr was somewhat of a celebrity.

It was quite a thrill for Kerr, who had his own private practice and was a professor at the University of Arizona. He would later attend the presidential inaugurations of Ronald Reagan and George H. W. Bush; it was Bush who as a Yale University alumnus interviewed Kerr when was applying for undergraduate admission.

When Kerr passed away in 1999, his son Chuck told the Arizona Daily Star that lighting the Cauldron had been “the pinnacle” for his father.

“That [Olympic] moment meant a lot to him,” Chuck Kerr told the Daily Star. “One of my dad’s favorite lines when we were out running was ‘Take it one telephone pole at a time.’ He tried to live his whole life like that, with the idea that all you can do is do your best and live one day at a time.”