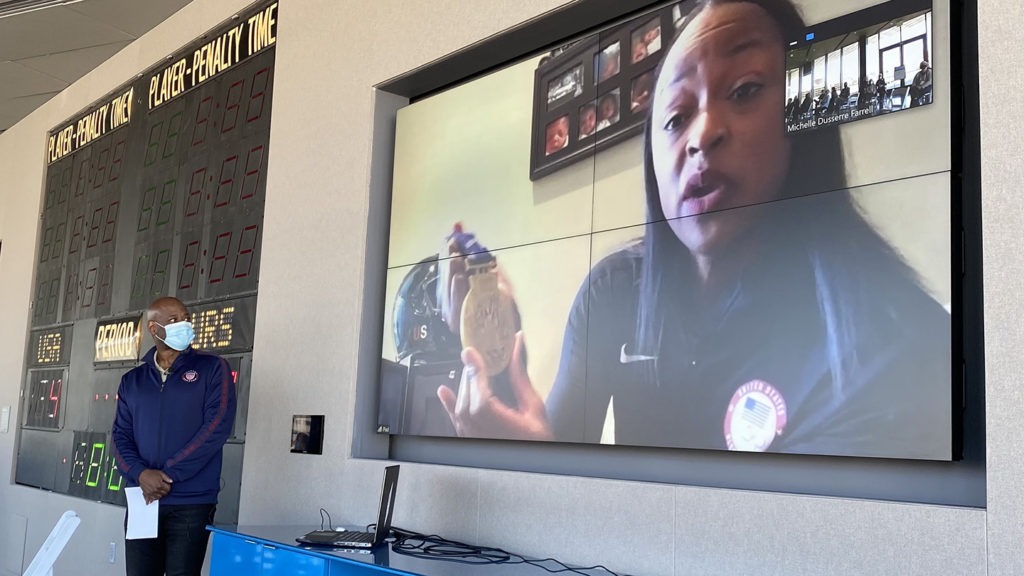 Vonetta Flowers, who was the first Black athlete to win an Olympic Winter Games gold medal, and two-time Olympian Chris Coleman joined the Museum’s February’s Member Monday event to share their journeys from track and field athletes to Olympic bobsledders.

The Member Monday events create an in-depth experience for members to learn more about athletes and their sport, as well as hearing about little known, behind the scenes elements of the Olympic and Paralympic experience. The events also highlight Museum artifacts and curatorial procurement of the collections.

The February Member Monday coincided with the Museum’s series of new content and events around Black History Month, including a digital exhibit featuring historic performances from Black Olympians and Paralympians.

At the Salt Lake City 2002 Olympic Winter Games, Flowers made history as she teamed with Jill Bakken to win gold in the two-person bobsled. Flowers, talking to the group through Zoom, said early on that she knew of the phenomenon of track athletes crossing over to bobsled only through the movie Cool Runnings. From Alabama, she said the biggest challenge she faced with bobsled was dealing with the frigid temperatures. Coleman, a 1992 and 1994 four-man bobsled Olympian, also talked about his opportunity to dive into the new sport from a chance encounter at the track as a collegiate sprinter at Binghamton University in New York.

As athletes who were in the push/brakemen position, they shared stories of how bobsled drivers select their push teams, and how a last-minute change just two weeks before the U.S. Olympic Trials opened the door for Flowers to team with Bakken to ultimately win gold in Salt Lake City. Flowers at times was emotional reminiscing about her Olympic experience and joked that it’s not often these days as a mom of three that she “gets into character” as she recounts these Olympic memories and experiences.

Flowers and Coleman also shared artifacts — through the screen for Flowers and in person for Coleman. Coleman brought his parade uniform and photos from the Opening Ceremony, and Flowers shared her helmet and gold medal, describing the detail on the medal and the unique traits to the medals crafted by the Salt Lake City organizers. They talked about the laborious task of managing, transporting and caring for their sleds and runners, and the technologies and detail of sled design with companies such as Bo-Dyn and BMW. The Museum recently completed installing the very sled that Bakken and Flowers used in Salt Lake City, which is on display in the Winter Games gallery.

The session concluded with a presentation by Museum archive specialist Ashton Langrick curator Boyd Smith. Langrick presented to the group some of the design details and requirements for the Salt Lake City medals, including IOC and IPC physical specs and requirements for usage of precious metals, requirements to include details of host nation cultural and heritage characteristics, and the incorporation of non-medal materials such as crystal, lacquer and precious stones. Smith shared details on his focus and vision as curator of a brand new museum.

To stay up to date on future Member Mondays and other membership benefits, be sure to become a Museum member.