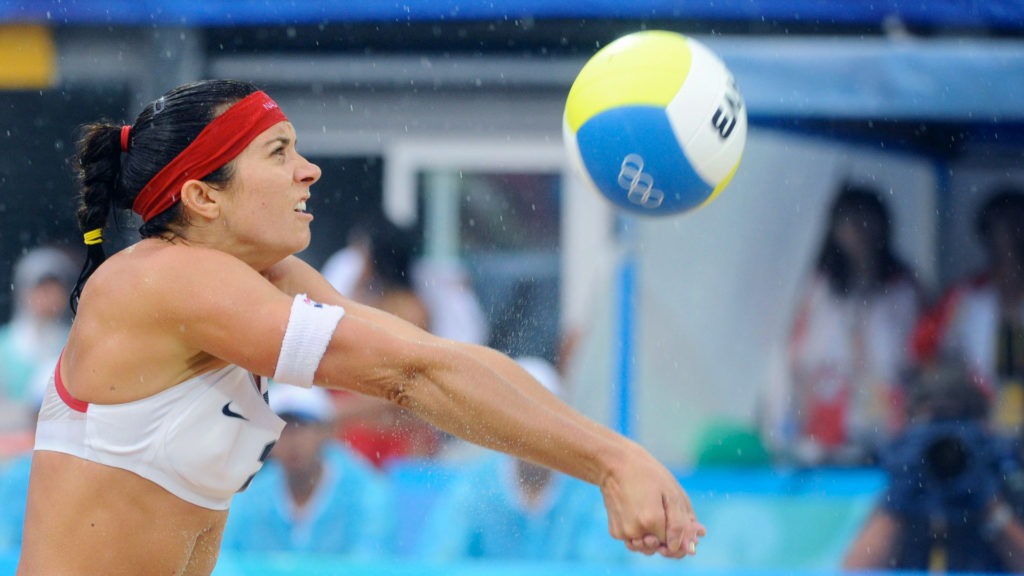 Misty May-Treanor loves sports. And she is as competitive as anyone, whether the setting is an Olympic volleyball tournament – she won three consecutive gold medals with partner Kerri Walsh Jennings – or on the golf course or at the bowling alley. It is safe to assume that she drove with a passion when the opportunity arose to participate in the Long Beach Grand Prix celebrity race.

“I hate to lose, even if it is against friends,” said May, who is a member of the U.S. Olympic & Paralympic Hall Fame 2019 induction class. “You can go to Dave and Busters and play that Pop a Shot game – I still want to win.”

It was that competitive spirit that drove May. As a youngster, she tried gymnastics until she grew too tall and decided she did not like ice skating because it was too cold. She tried snowboarding, tennis, paddle tennis and basketball and also learned to surf. In high school, she played volleyball and soccer – scoring lots of goals — and ran track. In addition to her volleyball exploits at Long Beach State University, where she was a two-time national player of the year, she also ran track for a year.

Being an athlete seemed so natural for May. After all, her father, Bob “Butch” May was a member of the 1968 U.S. Men’s National Volleyball Team and her mother, Barbara, was a nationally-ranked tennis player.

It should not surprise that May-Treanor’s husband, Matt, is a former professional baseball player, who played parts of nine seasons in the majors.

May was raised around volleyball. The family often headed to Santa Monica Pier, where Butch and Barbara had a pizza stand and there was plenty of beach volleyball. Misty still remembers some of the games, such as when she played with and against Liz Masakayan, Karch Kiraly and even basketball star Wilt Chamberlain.

“Anyone could play if they wanted to,” May said, adding that after the family moved to Orange County, she would head to Huntington Beach during the summer. “So I would get thrown in the mix at some point, even if I could just play back row and bump it up.”

How cool was that?

“All my summers were always playing beach volleyball. But it wasn’t like it was a career. It was to get extra touches and to play. It seems like now you coach kids and have to force them to do extra, but back when we played, extra was something fun you did. You would go down to the beach at 9 a.m. and play eight or nine games and go home when the sun went down.”

Those were her first forays into beach volleyball, but they certainly weren’t the last. May starred at Long Beach State; as a senior, she led the 49ers to a 36-0 season and national championship in 1998 and was presented the Honda-Broderick Cup as the nation’s top collegiate female athlete in any sport. Having completed her eligibility, May joined the U.S. Women’s National Volleyball Team, but that did not last long.

“I left the national team in 1999 because of politics and burnout,” May said. “But that opened the door for me to go to the beach. I knew I didn’t want to lose the [competitive] fire, so I had to make the change.”

Beach volleyball was a demonstration sport at the Barcelona 1992 Olympic Games and made its debut as a full-fledged sport at the Atlanta 1996 Olympic Games. May and partner Holly McPeak tied for fifth at the Sydney 2000 Olympic Games. But then came another important moment in May’s career, when she teamed up with a new partner in Walsh (who would marry a few years later and become Kerri Walsh Jennings). Their families had met at the Sydney Games – Walsh played on the U.S. indoor team – and nudged them to pair up.

“She drove down to my house in California and I said, ‘Why don’t you just try it? Either you like it or you don’t,’ ” May said.

The result was the most successful beach volleyball tandem of all time. Together, May-Treanor and Walsh Jennings won gold medals at the Athens 2004 Olympic Games, the Beijing 2008 Olympic Games and the London 2012 Olympic Games, as well as three world championships. They posted winning streaks of 89 matches and 112 matches.

In addition to her success on the court, May-Treanor also enjoyed being close to fans. She always made a point to sign autographs for anyone and everyone who wanted one and liked being accessible.

“We didn’t have a training center, we just mixed in with the general public,” she said. “Even at tournaments, there was no locker room or barricades.”

While May-Treanor and her staff are focused on helping their players improve and move on to four-year colleges, she said there is an adjustment from players of her era as most current players tend to focus more on one sport at an earlier age.

“One of the problems now with kids so specialized is they don’t understand how their bodies work and movement,” she said. “I can tell the difference between a single-sport athlete and a multisport athlete. I’m an advocate for kids playing as many sports as they can.”

Josh Barr was a sportswriter at The Washington Post for 17 years.