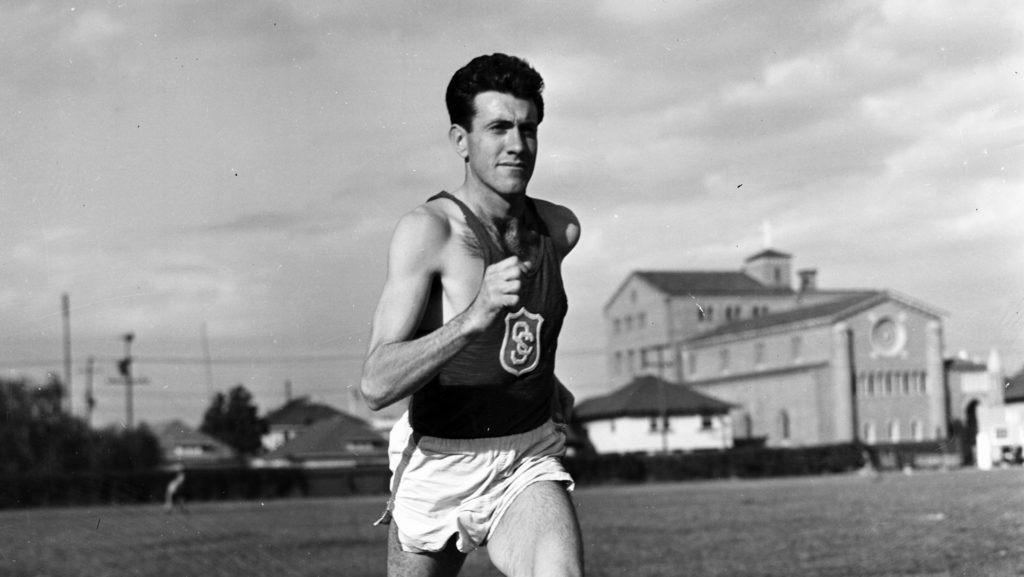 After competing at Berlin 1936, it was thought the runner’s best years were ahead of him; instead he served in the U.S. Army Air Corps

He had set the U.S. record for the fastest mile by a high schooler and competed at the Berlin 1936 Olympic Games. And while it was generally considered that Louis Zamperini’s best years as a runner lay ahead, his athletic career was put on hold when the United States entered World War II.

Zamperini entered the U.S. Army Air Corps; his military career would be remembered for generations.

A bombardier in the Pacific theatre, Zamperini flirted with danger on several occasions. During one run, his B-24 was damaged by enemy fire and made an emergency landing. Upon closer inspection, the plane had more than 600 holes from gunfire and shrapnel.

But on a search and rescue mission on May 27, 1943, Zamperini’s plane had two engines fail and crashed into the Pacific Ocean. Zamperini untangled himself from a mass of wires and floated to the surface, where he discovered a raft, inflated it and rowed over to fellow soldiers Russell Phillips and Francis McNamara. The other eight crew members did not survive.

The trio was lost and afloat at sea, surviving on the few provisions they had, withering away, while desperately trying to catch fish and salvage rainwater. Their raft, scorching in the sunlight, began to wilt, while sharks occasionally scoped them out. Zamperini lost nearly half his body weight. McNamara passed away after 33 days. Zamperini and Phillips two weeks later were captured by the Japanese after floating nearly 2,000 miles to the Marshall Islands.

Virtual Exhibit: Remembering U.S. Olympians who put it all on the line

Unaware that Zamperini had survived, his parents received a message from U.S. President Franklin D. Roosevelt, notifying them of their son’s death.

Zamperini spent the next two years as a prisoner of war, tortured many times over, though his status of being Olympian perhaps dissuaded the Japanese from killing him. He credited his athletic training for helping him survive.

“For one thing, you have to learn self-discipline if you are going to succeed as an athlete,” he said. “For another thing, you have to have confidence in yourself and believe that no matter what you’re faced with, you can deal with it — that you just can’t give up. And then there’s the aspect of staying in shape. And humor helped a lot, even in the gravest times.”

Zamperini was freed only when the Japanese surrendered in 1945 and the war ended.

Zamperini wrote two memoirs by the same title, Devil at My Heels. His story rose later to prominence when retold by author Laura Hildebrand in 2010 in the book Unbroken: A World War II Story of Survival, Resilience and Redemption, which rose to No. 1 on the New York Times’ bestseller list and was made into a movie.

Zamperini returned to Japan in 1998 to run a leg of the Nagano 1998 Olympic Torch Relay.

The Team USA Patriots series celebrates men and women who have represented the nation on the U.S. Olympic and Paralympic teams and also served in the nation’s armed forces.