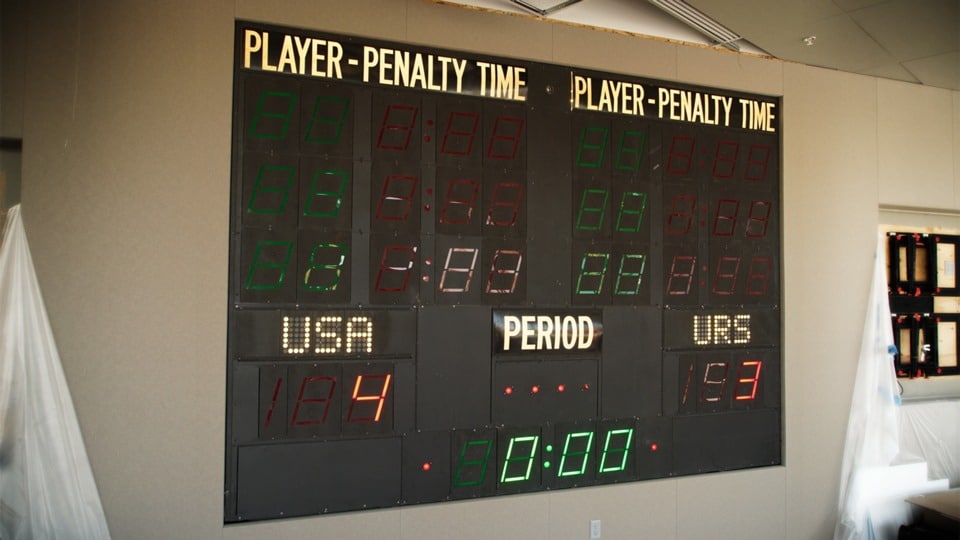 Lake Placid ‘Miracle on Ice’ scoreboard on display at the Museum

U.S. Olympic & Paralympic Museum chairman of the board Dave Ogrean, previously the USA Hockey executive director, secured the panel and found funding to transport it to the Museum

When Dave Ogrean learned that the center scoreboard hanging from the ceiling of Herb Brooks Arena in Lake Placid, New York, was being dismantled and replaced, he immediately knew where he wanted one of the panels to live its next life.

Having served 18 years as executive director of USA Hockey, Ogrean is now the chairman of the board of the directors of the U.S. Olympic & Paralympic Museum that will open this May in Colorado Springs. What better place, Ogrean thought, to memorialize one of the greatest moments in sporting history? This was the scoreboard that hung in the building then known as the Olympic Center when the United States beat the Soviet Union, 4-3, in the Lake Placid 1980 Olympic Winter Games, better known as the Miracle on Ice.

“My first thought immediately was the Museum,” Ogrean said.

Securing one of the scoreboard’s four panels was the easy part. Daktronics, the scoreboard’s manufacturer, wanted one of the panels. So did the Lake Placid Olympic Museum as well as another sports museum in New York. That left one panel and Ogrean made sure that Denny Allen, then the longtime Olympic Center general manager in Lake Placid, knew that Ogrean had a home for the final panel.

“Bill is a longtime friend and he said, ‘If you can get it, I’ll pay for the shipping,” Ogrean said. “This was not an uncomplicated proposition. But thanks to El Pomar, they paid the freight, literally.”

The scoreboard was disassembled in Lake Placid, with the 850-pound panel bound for Colorado Springs placed standing up in a crate and trucked cross-country. Upon arrival, the crate was carefully laid flat on the ground so that artifact handlers could do a condition report, according to Mary Olson, senior project manager – exhibits for CREO Industrial Arts, the Museum’s exhibit fabrication partner.

A custom cart subsequently was built to maneuver the scoreboard and it was recovered and stored in Colorado Springs until early January, when a crane lifted it into place in a second-floor meeting room in the U.S. Olympic & Paralympic Museum.

The scoreboard was then carefully covered to protect it during the remaining construction until the Museum opens this spring.

“From the first conversation to putting it into the Museum physically was at least a year and a half,” Ogrean said. “I think it’s going to be a really cool part of the Museum, one more tangible reminder of what is one of the greatest Olympic moments in U.S. Olympic history.”