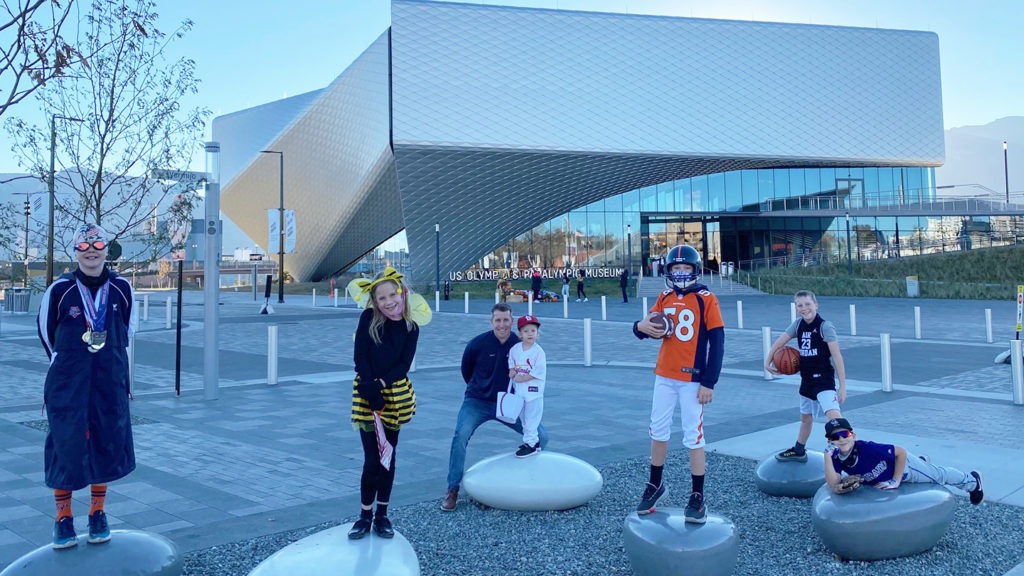 It’s a treat! Kids enjoy Fright at the BOO!seum

Princesses, doctors, superheroes and even a large chicken filled the exhibits of the U.S. Olympic & Paralympic Museum during Fright at the BOO!seum over Halloween weekend. Guests 12 and under dressed in costume received free admission to the Museum and enjoyed making spiders, drinking hot apple cider and picking up some candy while exploring the exhibits.

The Museum was decked out for the occasion. The entrance welcomed all guests with hay bales, pumpkins and a bobsled from the U.S. Olympic & Paralympic Training Center. Cobwebs and spooky masks lined the Chapman Events Space where kids used little beads to make their own Halloween spiders. Their efforts were awarded with chocolate gold medals.

“Yeah, I really liked it. I liked running on the track, and I like my medal,” said Felix Martin, a 6-year-old from Colorado Springs who wore a bear costume. He wore his costume mask over his face mask and growled with delight.

“I liked making the spiders the most. Mine was so cute, which is weird, because I usually don’t like spiders,” laughed Lucy Johnston, who dressed as a nurse and creatively used a blue surgical mask as part of her costume.

Guests finished their visit to the BOO!seum with a stop by the Flame Cafe, where apple cider and tasty cinnamon donuts were available for purchase. They were able to collect a small plastic bag of candy as well to ensure a safe, contactless and sweet Trick-Or-Treating experience.

“I saw dragons, superheroes, animals,” said Museum team member Ashley Shumaker, who dressed up as a witch. “Families came dressed together too; I saw a pirate dad with a little baby on his shoulder as a parrot! I saw a little Urkel, too. It was hilarious.”

“It was nice to see kids and their families getting dressed up and having fun on Halloween,” said Frances Martin, Felix’s mother bear. “I’m, honestly, thankful the Museum did this. Things seemed normal for a second.”

Chase McCleary, an intern at the U.S. Olympic & Paralympic Museum, is a student at the University of California, Berkeley.