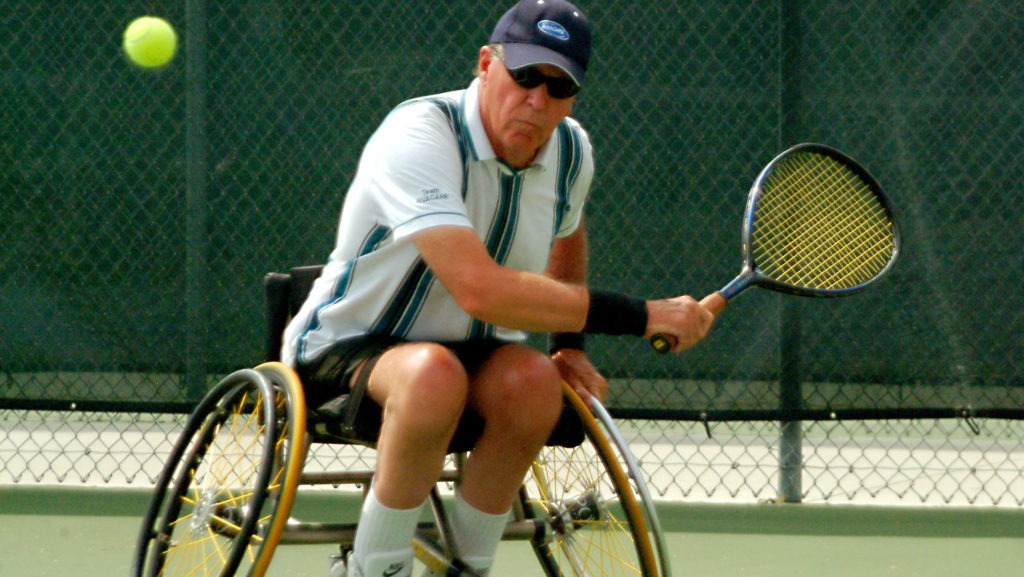 It was just a few months following college graduation when Bruce Karr was selected to the U.S. team for the 1960 Stoke Mandeville Games in Rome – which are now recognized as the first international Paralympic Games.

Although Karr excelled on the basketball court at the University of Illinois, that was not the sole reason he participated at the Rome 1960 Paralympic Games. Instead, Karr recalled, it was his all-around athletic ability that earned him the trip to Italy, where the locals struggled to pronounce his name and produced a new nickname that stuck: Broo-chay.

“I mainly was a basketball player, but [at Rome] I also swam in three events. I put the shotput, discus and javelin. I played table tennis, singles and doubles. I even shot snooker,” Karr said. “If you were specific to one sport, unless you were really super-duper, it was better to do several different things.”

Six decades later – after participating in five Paralympic Games, winning 12 gold medals and later carrying the torch during the Atlanta 1996 Paralympic Games torch relay (he still has the torch) — a handful of special moments still stand out to Karr.

For starters, the wheelchair basketball games at Rome were staged in an outdoor stadium that primarily functioned as a tennis court. Complete with soft red clay as a playing surface.

“They set up basketball standards at each end, but it was like tracking through sand to play,” Karr said, noting that the U.S. beat Australia to win the gold medal.

“It was the first Paralympics so I guess they were trying all kinds of things. It was a good experience and good camaraderie. A good bunch of people.”

It was on that trip that Karr first met an international figure of prominence.

“In Rome, we had a private audience with the Pope [John XXIII],” Karr said. “I’m not Catholic, but I was brought up in a religious family so I said, ‘I want to go to that.’ We went down an alley and the Pope came out on a balcony and spoke with us for a little while.”

That was only the beginning of a series of memorable run-ins.

At the Tokyo 1964 Paralympic Games, Karr was introduced to the Japanese Crown Prince Akihito and Crown Princess Michiko. It was during those Games, Karr remembered, that he was summoned off the floor in the middle of a basketball game because he had a snooker match taking place in the same venue. Years later, while coaching the U.S. wheelchair basketball national team on a goodwill tour of Japan, Karr was re-introduced to the same royalty, who were now the emperor and empress of Japan.

In 1968, the Paralympic Games were relocated from Mexico City to Israel and in the gold-medal wheelchair basketball game, Team USA played the host Israelis in a game staged before an overflow crowd in an outdoor park. Five months after the Six Day War, Israeli hero Moshe Dayan was on hand to present the gold medals and the U.S. team needed a mounted escort to reach the court, where they lost. Karr still has a photo of himself with Dayan.

At the Toronto 1976 Paralympic Games, Karr added archery to his competitive roster (he won gold at the Para Pan American Games) and worked as an on-air commentator for the Canadian television broadcast of the Games. It was there that a photograph of Karr was taken and later used on the cover of a book, So Get On with It: A Celebration of Wheelchair Sports.

Indeed, it was quite a run for Karr, who grew up outside Chicago and was a three-sport athlete in high school: football in the fall, basketball in the winter and tennis in the spring. But stricken with polio during as a senior, Karr was left with little strength in his right leg and none in his left leg. He recovered to graduate from high school and enrolled at the University of Illinois, completely unaware that professor Tim Nugent had brought that campus to the forefront of accessibility and adaptive sports, including the preeminent wheelchair basketball program.

“When somebody told me about it, I said, ‘You can’t play basketball in a wheelchair,’ ” Karr said, noting that he did not participate in any of Nugent’s programs during his first semester on campus.

“But the second semester, I started playing basketball and it kind of went from there.”

After graduating, Karr went to work as an accountant for United Airlines and transferred into purchasing. He later started his own furniture warehousing business. When he moved to Florida later in life, he started playing wheelchair tennis, ran the Florida Open (which became the biggest wheelchair tennis tournament in the world) and created a nonprofit to help Paralympic athletes with their competition expenses.

“That was something that always bothered me,” Karr said. “I would make these teams and I would get a letter that said, ‘Congratulations on being selected for this Paralympic team and some other facts and you’re going to be required to raise X number of dollars to pay for your airfare, uniforms and equipment.’ That always bothered me. So we started the National Wheelchair Sports Fund, a 501(c)(3) and we’ve supported individual athletes and programs all over the country.”

“Wheelchair sports has taken me all over the place,” said Karr, who continues to play tennis at age 84 but has trimmed his tournament schedule to local events in Florida. “I got involved with tennis when I moved down to Florida and I’ve played in tournaments all over the world. It’s been quite a ride.”