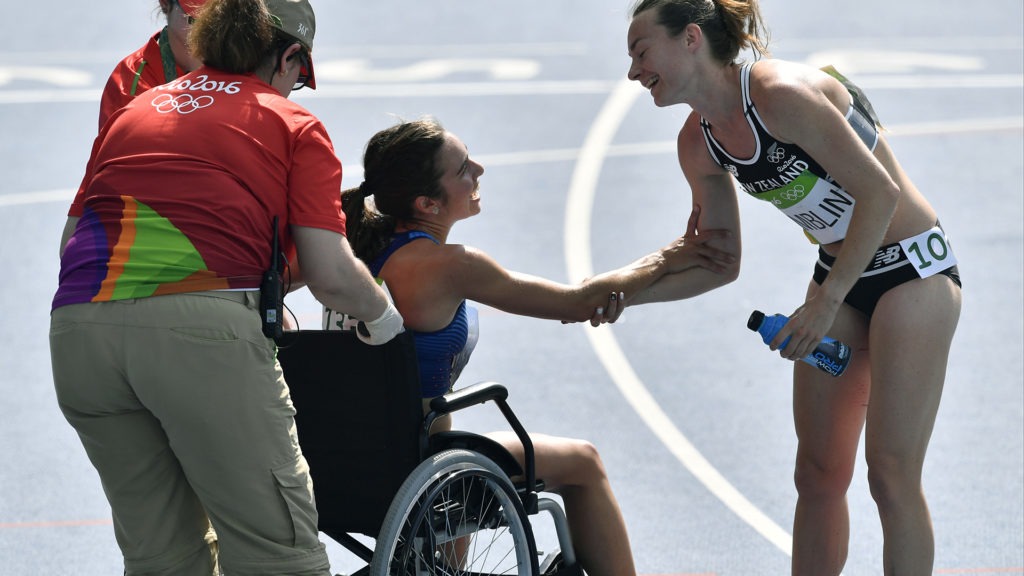 As she looks back on how she handled the most trying moment of her life – in a very public setting — Abbey (D’Agostino) Cooper thinks about how the months leading up to the Rio 2016 Olympic Games prepared her for any situation.

So when she tumbled over another competitor and fell to the track midway through a semifinal heat of the women’s 5,000-meter run, suffering a serious knee injury, Cooper said it was that preparation that led her to get up and encourage fellow runner Nikki Hamblin to finish the race.

“Honestly, everything just happened so quickly,” Cooper said. “There was no time for decision making. It was just instinctual, automatic thought and that truly assures me that it was the power of the Holy Spirit that allowed me to respond in that way.

‘My heart had just been prepared. And that explains the action of us helping each other up and all of that. Because if I took time to think about it really, I would have been devastated.”

The months leading up to the Olympic Games had been trying for Cooper. Though healthy throughout her college career, she dealt with a series of injuries leading up to the U.S. Olympic Trials. She finished fifth at the trials – the top three earned berths to Rio – but received a spot on the Olympic team when two runners who finished ahead of Cooper passed up their spot in the 5,000 to focus on other races.

Even then, though, Cooper faced adversity. She felt a sharp pain in her groin, which led to the discovery of a stress reaction on both sides of her pelvis. In the three weeks leading up to the Games, Cooper ran just once. She felt fortunate just to be on the starting line in Rio.

Cooper, from Massachusetts, and Hamblin, from New Zealand, had never met until that fateful moment, when Hamblin tripped and fell along the back straightaway, then Cooper tumbled over her. Cooper stood up first and exhorted Hamblin to get to her feet and finish the race, even though they were all but out of contention to advance to the final. As they tried to continue around the track, it became apparent that Cooper was seriously injured. Then it was Hamblin’s turn to motivate Cooper.

In that moment, as they worked to finish the grueling race, Cooper and Hamblin became intertwined. Cooper and Hamblin were honored with the International Fair Play Award by the International Olympic Committee. Cooper also received the Jack Kelly Fair Play Award from the U.S. Olympic Committee. To celebrate Cooper’s display of the Olympic spirit, the U.S. Olympic & Paralympic Museum will encourage its guest experience staff to recognize each other’s work with a card named in Cooper’s honor.

Upon crossing the finish line in Rio, Cooper embraced Hamblin for an emotional hug. Cooper left the track in a wheelchair. She had reconstructive knee surgery. Rehab took six months.

“I’m thankful that I got to be a part of what [God] did that day, because being able to talk about these intangibles of sacrifice and kindness, that is amazing,” Cooper said. “I love talking about that and stewarding the story.

“If I don’t do anything more athletically from now on, I will be sad. I’ll definitely be really disappointed and sad and surprised because I really do feel like my best is ahead of me. But I won’t have any regret. I feel really thankful that I get to share this story. And it has given me a platform to talk about things that matter with many different audiences.”

While recovering, Cooper shared her story with a variety of groups. She eventually resumed training and moved to North Carolina. She and her husband, Jacob Cooper, married in December 2018 and honeymooned in New Zealand, where she got together with Hamblin.

“We had always wanted to go there and were like, “Oh my gosh, we have to reach out,’ “ Cooper said. “She and her family drove 2 ½ hours to come see us. It was awesome.”

As she trained for the Tokyo 2020 Olympic Games, Cooper said that interest in her story increased. Even with the global pandemic postponing the Games until 2021, Cooper has continued to speak with different groups, often virtually, instilling the importance of qualities such as the Olympic values of friendship, respect, excellence and the Paralympic values of determination, inspiration, courage and equality.

“Almost every time I get to retell the story, there’s a small sliver of extra gratitude,” Cooper said. “Sometimes it just hits me, like what a crazy thing! … And then there are times where a new kind of lesson comes from it. I’ll figure out a new way to teach it.”

With another year to prepare for the Tokyo Games, Cooper continues to train. She also has thought of what comes after her running career. Her husband is a sports psychologist and they have discussed opening a practice to help athletes, with Jacob working on the mental aspect and Abbey on the physical aspect. The need to help others seems to be a theme in Cooper’s life.

“We really would like to have a private practice together,” Cooper said. “I’m also interested in sport chaplaincy. I have a lot of mentors who have been so helpful to me. So if I can serve athletes in a spiritual context, where that is at the Olympic Games or national championships, I would enjoy that as well.”