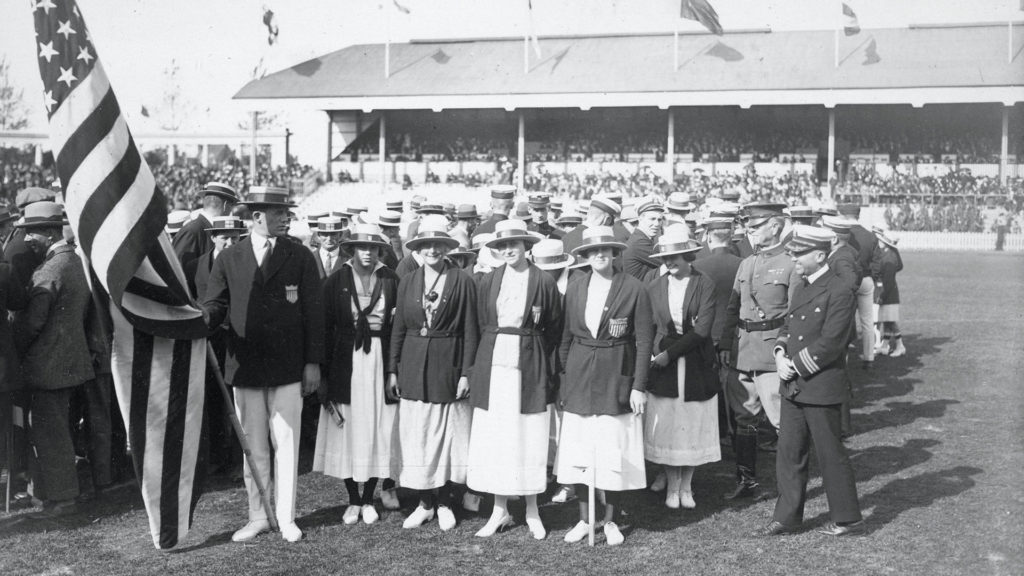 With the Olympic flag flying over the Games for the first time, U.S. athletes won 47 gold medals, headlined by several future Hall of Famers

Team USA sent 288 athletes to the Antwerp 1920 Olympic Games. In the aftermath of World War I, with several countries barred from participating in the Games, U.S. athletes stood atop the podium more than any other country, winning 41 gold medals, along with 27 silver and 27 bronze.

The contingent also included 14 women; it was the first time the U.S. sent a women’s swimming team to the Olympic Games and 18-year-old Ethelda Bleibtrey dominated. Bleibtrey, who took up swimming in her recovery from polio, won the gold in all three women’s swimming events: the 100-meter freestyle, the 300 freestyle and the 4×100 relay. Including preliminary heats, Bleibtrey swam five races and broke the world record in each race.

The Antwerp Games also saw the debut of the Olympic flag and the athletes’ oath. Also, for the first time ever, doves were released during the Opening Ceremony, as a symbol of peace.

Pierre de Coubertin, the founder of the modern Olympics, had created the flag in 1913, with the five interlinked Olympic rings representing the union of the five continents and the gathering of the world’s elite athletes. But the flag had not yet flown over an Olympics; the Berlin Games of 1916 were canceled because of World War I.

Belgian multi-sport star Victor Boin recited the athletes’ oath: “We swear that we shall take part in these Olympic Games in a spirit of chivalry, for the honor of our countries and for the glory of sport.”

While the U.S. athletes shined in Belgium, their journey to the site of the VII Olympiad was anything but glamourous.

The athletes traveled across the Atlantic Coast on two ships. The USS Frederick carried athletes and coaches who were in the U.S. Navy. Athletes and coaches from the U.S. Army and civilians were scheduled to take the Northern Pacific, but that ship was deemed not safe for travel. Instead, their trip was delayed six days and rearranged to travel on the Princess Matoika, which had just been used to bring back the bodies of 1,800 American soldiers who died in the war.

The athletes on the Princess Matoika were disgusted with the conditions. The hold reeked of formaldehyde from the dead bodies. There was nowhere to train. The food was terrible. Rats seemed to be everywhere. Upon arriving in Belgium, many of the American athletes demanded better accommodations in Antwerp, cabin passage home and railroad fare from New York to their home cities. It was labeled the “Mutiny of the Matoika.”

Once cooler heads prevailed, the U.S. athletes went on a gold-medal spree. On the track, Paddock won gold in the 100, silver in the 200 and helped the U.S. win gold in the 4×100 relay. Eagan won the gold in the lightweight boxing; 12 years later, he would win gold in bobsledding to become the only person to win gold medals in different sports at the Olympic Summer and Winter Games. Kelly won gold in rowing in single and double sculls. The U.S. dominated the shooting events, winning 13 gold medals. In the pool, Kahanamoku defended his pre-war Olympic title in the 100 freestyle and also won gold in the 4×200 freestyle relay.